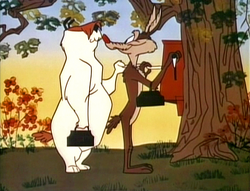 Ralph Wolf and Sam Sheepdog are characters in a series of animated cartoons in Looney Tunes and Merrie Melodies. They were created by Chuck Jones.

Ralph Wolf (named after a Warner Bros. employee) has virtually the same character design as another Chuck Jones character, Wile E. Coyote: brown fur, wiry body, and huge ears, but with a red nose in place of Wile E.'s black one; (usually) white eyes instead of Wile E.'s yellow; and, occasionally, a fang protruding from his mouth. He also shares the coyote's appetite, and persistent use of ACME products, but he covets sheep instead of road runners and, when he speaks, doesn't have the upper-class accent or the egotistical bearing of Wile E. Another crucial difference is that of personality: Ralph does not have the fanatical drive of Wile E. in pursuing his prey, preferring to abandon his chase at the end of the working day.

Sam Sheepdog, by contrast, is a large, burly Berger De Brie (Briard Sheepdog) with white or tan fur and a mop of red hair that usually covers his eyes. He very rarely runs and tends to be sedentary in his movements. He does, however, possess sufficient strength to incapacitate Ralph with a single punch once he catches him.

Inspired by the Friz Freleng cartoon "The Sheepish Wolf" of a decade earlier (17 October 1942), Chuck Jones created Ralph and Sam for a series of film-shorts. The first of these was "Don't Give Up the Sheep", released 3 January 1953.

The cartoon proved a success, prompting Chuck to repeat the formula five more times between 1953 and 1962. In 1963, ex-Jones animators Phil Monroe and Richard Thompson also starred the duo in their cartoon "Woolen Under Where".

The series is built around the idea that both Ralph and Sam are just doing their jobs. Most of the cartoons begin at the beginning of the workday, in which they both arrive at a sheep-grazing meadow, exchange pleasant chitchat, and punch into the same time clock. Work having officially begun, Ralph repeatedly tries very hard to abduct the helpless sheep and invariably fails, either through his own ineptitude or the minimal efforts of Sam (he is frequently seen sleeping), who always brutally punishes Ralph for the attempt. In many instances there are also multiple copies of Ralph and particularly Sam.

At the end-of-the-day whistle, Ralph and Sam punch out their time cards, again chat amiably, and leave, presumably only to come back the next day and do it all again. Both Ralph and Sam were voiced by Mel Blanc. In "A Sheep in the Deep", the workday is interrupted by a lunch break, which they also conduct amiably. The operation seems to run 24 hours a day or at least into another shift, as when Ralph and Sam "punch out" they may also run into their nighttime replacements, Fred and George, respectively (see "Sheep Ahoy": inconsistency in naming). In some of their earlier appearances Ralph and Sam are named inconsistently: in particular the Sheepdog's shift replacement sometimes addresses him as "Ralph."

Sheep, Dog, & Wolf (also known as Sheep Raider) for the original Sony PlayStation and PC, published by Infogrames, is a faithful adaptation of the series' sheep-abducting schemes. The Road Runner makes a cameo appearance in the training level and also the final level, racing in the desert against Ralph. Ironically, neither Ralph or Sam speak within this game.

Sam appears in the Taz-Mania episode "Mutton For Nothing" voiced by Jim Cummings. In this episode, Taz is sent by the Predators-R-Us temp agency to cover for Ralph Wolf while he's on vacation. Taz tries unsuccessfully to steal the sheep from Sam Sheepdog. A bit of character confusion is at play in this episode, as Sam references Ralph as being "that Coyote."

Ralph and Sam make a brief cameo in the 2003 Comedy/Adventure film Looney Tunes Back in Action; they are sitting at the same table eating lunch, when Ralph reveals to Sam that he finally caught a sheep, Sam grabs him by the neck and continually slaps him across the face.

They both appear in Looney Tunes Cartoons. In their second appearance, "A Wolf in Cheap Clothing", Sam mentions he has two kids. 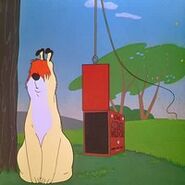 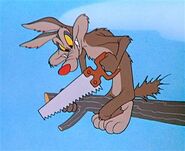 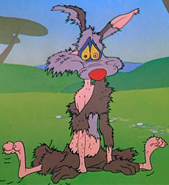 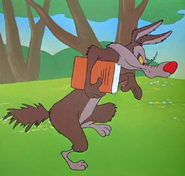 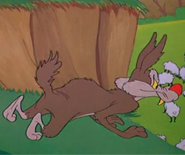 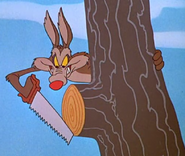 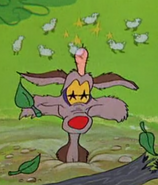 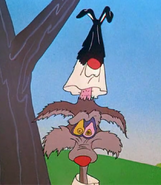 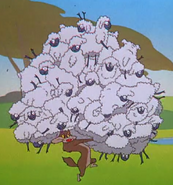 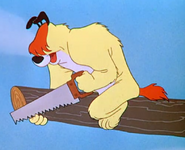 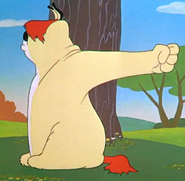 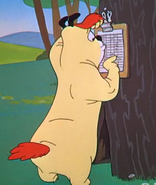 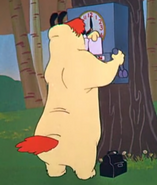 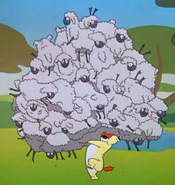 Ralph as appears in a cutscene for Sheep Raider.

Sam as he appears in a cutscene for Sheep Raider.

Ralph and Sam have become a sort of American cultural shorthand for "the usual suspects" or "the loyal opposition," describing two adversaries who have opposed each other for so long and become so familiar with each other that they've come full circle and are now nearly friendly.

One example of this was on the episode Donut Run of the television program Veronica Mars, wherein Veronica greeted rival private detective Vinnie Van Lowe with "Mornin' Sam," and he replied, in kind, "Mornin' Ralph."

Actor Chris Rock mentions Ralph and Sam in his book Rock This!. According to the text, a white classmate of Chris' who racially harassed him in high school not only resurfaced years later as his chauffeur, but also attempted to be amicable and suggest they get together for coffee. Chris employs the "time clock" concept to racial tensions in schools by asserting his tormentor was simply playing the role he was dealt.

The NewsRadio episode Twins played with the reference in reverse. Bill McNeal and Jimmy James pass each other while stepping through Dave's window. Jimmy (the station owner) says, "Mornin' Sam," Bill (the office troublemaker) replies, "Mornin' Ralph," and Jimmy comments, "I love that joke."

A deleted scene for the Family Guy episode Tales Of A 3rd Grade Nothing features Peter Griffin as Sam Sheepdog at the time clock with Ralph Wolf.

In a Twitter conversation on June 2nd, 2012, Howard Stern Show producer Gary Dell'Abate tried to reference the characters, but mistakenly called them Road-Runner and Coyote. Gary got his nickname "Baba Booey" after misquoting another cartoon character, Quick Draw McGraw.

IDW comics’ My Little Pony books featured two separate references to the duo in the form of characters named after them. The first were a pair of pony royal guards who greeted each other at the beginning/end of their respective duty shifts. The second were a pair of Storm Creatures from the My Little Pony: The Movie Prequel series, who engaged In friendly conversation shortly before being attacked by pirates while on guard duty.