Ready, Willing, Unable is an episode of Taz-Mania directed by Lenord Robinson.  It first aired 22 Sep 1994.

Mr. Thickley is in the woods looking for rare animals to show the hotel guests, when he is caught by Bull and Axl's snare. He finds that the Gators are looking for a Tasmanian Devil, and offers to help them. Mum notices Mr. Thickley is late for a lecture he's supposed to give at the hotel, so she sends Bushwacker Bob to look for him. He drags Taz along. The Gators and Thickley try several trapping methods, including dressing as pizzas for bait, but each fails. Eventually, it dawns on Mr. Thickley that Taz is a Tasmanian Devil. He tells Bull and Axl that he can't help them capture his friend, and returns to the hotel with Bob and Taz. 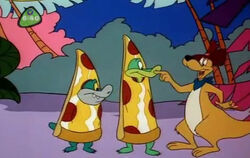 Retrieved from "https://looneytunes.fandom.com/wiki/Ready,_Willing,_Unable?oldid=154883"
Community content is available under CC-BY-SA unless otherwise noted.