"Merrily We Roll Along" plays, followed by a segment of the "lively" portion of Wagner's "Siegfried" funeral march, as Bugs walks onstage to applause and prepares to play the grand piano. He runs through a large assortment of visual gags while continuing to play the "Hungarian Rhapsody". An apparent audience member coughs and hacks loudly just as Bugs is poised to play. When it happens a second time, Bugs pulls a revolver out of his tuxedo and shoots the audience member, dispatching him, and then blows the smoke out of the gun barrel before returning it to his tuxedo and resuming the piano.

At one point he is interrupted by the ring of a phone, timed to echo a short strain that Bugs is playing at that moment. The phone is inside the piano: "Eh, what's up doc? Who? Franz Liszt? Never heard of him. Wrong number." When playing a notable triad in the middle of the piece, which happens to be the same triad notably used in the unrelated Rossini aria "Largo al factotum" (from The Barber of Seville, which would be spoofed in a later Bugs cartoon), Bugs accompanies his piano playing by singing, "Fi-ga-ro! Fi-ga-ro!"

A mouse appears and pesters Bugs the rest of the way, although the first ("slow") half of the piece is played nearly "straight," with just a few small gags. After barring the mouse's hole shut, Bugs flips through his sheet music and accidentally turns to a pin-up girl, then turns to the next part of the rhapsody.

Bugs stops at the very short pause in the piece, acknowledging the applause of the audience, and the mouse seizes the opportunity to instigate a major musical shift, to a "Boogie-woogie" number. Bugs joins in, seeming to enjoy the duet, but eventually slams the lid on the mouse. When the mouse plays "Chopsticks" while still trapped, Bugs throws a stick of dynamite under the lid. Bugs mourns for the mouse as "Taps" plays softly, but when it stops mid-song, he realizes that the song was coming from the piano. Bugs peeks under the lid and the mouse hits him with a mallet.

Bugs then returns to playing the rhapsody. As the pace picks up, he speaks to the camera (for the last time in the cartoon): "Look! One hand! ... NO hands!" The camera pulls back, and he is deftly playing the piano keys with his toes.

Nearing the end of the rhapsody, he is in shock after turning to the finale page which consists of scrambled, quick playing, nearly impossible to read notes. He takes off his shirt, oils his hands, and prays, preparing to play the intense part, but is startled to hear the frenzied finalé playing behind him. The mouse, complete with tie and tails, plays a tiny piano. After the full-orchestra finalé, Bugs disgustedly plays the three chords that end the piece, and then mutters inaudible profanity which can be lip-read.

The same year Warner Bros. released "Rhapsody Rabbit", MGM produced a very similar Tom and Jerry cartoon called "The Cat Concerto", which features Tom being distracted by Jerry while playing in a concert. Most of the gags are identical to both cartoons, and they used the same music that was played. "The Cat Concerto" won an Academy Award for Best Animated Short Film.

Both MGM and Warner Bros. accused each other of plagiarism, after both films were shown in the 1947 Academy Awards Ceremony. Technicolor was accused of sending a print of either cartoon to a competing studio, who then plagiarized their rival's work. This remains uncertain to this day, though "Rhapsody Rabbit" has an earlier MPAA copyright number and release date. The massive similarities could be coincidental, and are considered as such by those who don't believe that there was any plagiarism to start. Since the animators at Warner Bros. and MGM were experienced in making cartoons, it could be likely that they all thought of similar concepts and expanded them, not knowing that similar situations resulted in each cartoon (as is the case with a lot of creative works regardless of genre and medium).

The situation was made into an episode of the Cartoon Network anthology series ToonHeads called "The Great Cartoon Controversy". In that episode, it's revealed that Friz Freleng finally got back at both Hanna and Barbera by breaking Tom and Jerry's streak of four consecutive Academy Award wins by winning the Oscar for the Tweety and Sylvester cartoon "Tweetie Pie" in 1947. 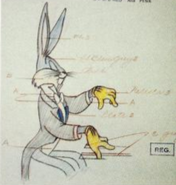 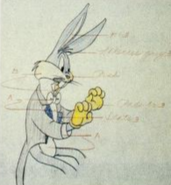 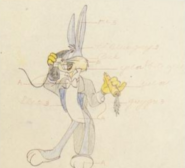