A homeless Daffy Duck is trying to find a place to sleep in a City Park. Daffy tries to sleep in a trash can, up a tree, and even in a gopher's hole, evicting the gopher, furniture and all. Porky is a cop, who tells Daffy that sleeping in the park is against the law. After being kicked out of the park, Daffy complains that it is "the coldest night in sixty-four years" and wonders where he is going to sleep. Daffy spots a department store window with a comfortable living room-type display and goes inside. Porky sees him and comes in the store, using a skeleton key.

A series of chases ensues, with Daffy always outmaneuvering Porky, including twice where he tricks Porky into entering an empty elevator shaft. Daffy begs for sympathy from Porky for the sake of his two kids, which are actually wind-up toy ducks that look like Daffy. Porky takes pity, telling Daffy that he can stay at the store, and justifying it by saying to himself that he understands Daffy's situation because he has three kids of his own, which are actually wind-up toy pigs. 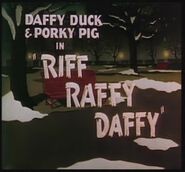