Road to Tazmania is an episode of Taz-Mania directed by Gary Hartle.  It first aired 14 Dec 1991.

The title is a play on the Road to... movies produced between 1940 and 1962, starring Bing Crosby and Bob Hope.

Hugh and Uncle Drew decide to take Taz with them on a trip to buy orange juice, but they are diverted to a spy store instead.  They are given a covert package instead of juice and then find themselves being pursued by spies.  On the way home Drew stops at The Coconut Groove to enter a dance contest.  Hugh and Drew perform their routine, oblivious to the numerous attacking spies which Taz repels.

This episode marks the first appearance of Uncle Drew. 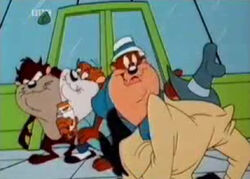 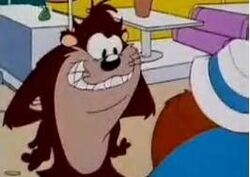 Retrieved from "https://looneytunes.fandom.com/wiki/Road_to_Tazmania?oldid=154931"
Community content is available under CC-BY-SA unless otherwise noted.