Elmer Fudd is a carrot farmer who spots Bugs' rabbit hole, claiming that Bugs has raided his carrot farm, "Ooohh, that wascal wabbit's in my carrots again!" and decides to shoot him with a gun, "I'll fix that wabbit for good this time!" After shooting into an empty hole. Bugs had conveniently left the hole, then attempts his "fake dying" act. Elmer exclaims "The rabbit kicked the bucket," then he and Bugs start dancing and celebrating until Elmer begins to realize Bugs tricked him, as the rabbit is still very much alive.

This action prompts Fudd to call "ACME Pest Control" ("Hewwo? ACME Pest Contwol? Weww, I've got a pest I want to contwowd.") for a robot with the express purpose of evicting Bugs. The robot initially confuses a mule for a rabbit and Elmer — who was trying to explain to the robot what a rabbit looks like — for his intended target before getting the early upper-hand. Bugs quickly evens the score by luring his antagonist under a rotating water sprinkler, causing the robot to rust. Elmer, furious at the robot's incompetence, oils the robot (restoring its original color), and warns it to get Bugs or else he'll sell it for old scrap iron.

Later, Bugs disguises himself as a female robot (where he literally throws a wrench into their "relationship"), before finally causing the robot to follow him through a construction site and beneath a piledriver. Back at home, Elmer starts wondering how the robot fared, before Bugs greets him by dumping the robot "Does this answer your question?" — or what is left of it — onto the floor; it is presumed that the robot was crushed underneath the piledriver. Bugs then leaves the house and says, "You know, someday these scientists are gonna invent something that will outsmart a rabbit." 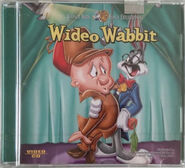 This cartoon was shown with parts cut on ABC, CBS, and the syndicated The Merrie Melodies Show.[1]

Scene that was cut on ABC, CBS, and both versions of The Merrie Melodies Show (FOX and syndicated)