In this futuristic setting, Daffy Duck is Sgt. Joe Monday and narrator of the story. His partner, Det. Schmoe Tuesday (Porky Pig), and himself are returning from a routine investigation of a 712-malicious mischief ('School children blew one of the rings off of Saturn. When will parents learn to keep uranium out of their children's reach.') in the Big Dipper area, when they receive a call from the police chief. They return to headquarters and await the police chief's call ('10:52: Back at the old desk, waiting for a call from the Chief. Half a cop's life is spent in waiting. 10:53: the Chief called.'). We then hear Daffy exclaiming that the police chief is asking him to pursue the Flying Saucer Bandit, but see the police chief on his knee's begging and crying for Daffy to take the case. Upon telling the viewer's that he consents to take the case, we see the police chief kissing his feet.

Sgt. Monday and Det. Tuesday then report to the scene of the crime. The crime robots are already there picking up clues to aide Daffy and Porky in there ability to identify the Flying Saucer Bandit. They return to the station with a bag of clues, and empty them into the Univac clue machine, which pops out a music sheet for a piano. The music sheet is placed into a piano, which plays out the song Mother Machree, identified by Daffy. They proceed to the George 'Mother' Machree file where they begin their pursuit of the Flying Saucer Bandit.

They learn that the Flying Saucer Bandit is at a restaurant ordering a sandwich, to which they hurry because he is known as a 'notoriously fast eater'. Upon arriving, they realize they have missed the bandit, and continue their chase ('1:07: He left the Blast-Inn. 1:08: We arrived at the Blast-Inn. Our deductions later proved that we had missed him by one minute. 1:09: We set out in pursuit.') We see Porky and Daffy in hot pursuit of 'Mother' Machree when they lose him in a smog bank over Los Angeles. Porky points out a smog cloud flying away, when they pull up and tell Machree to come out, to which Daffy informs us he has an elaborate alibi already cooked up, "I didn't do nothing... I didn't do nothing! Like I said, I didn't do nothing!" Daffy and Porky are sentenced to thirty years in prison for false arrest. 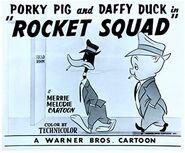 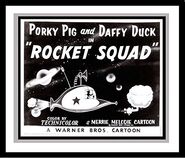