Roderick the Rat (also known as Rod or Roddy) is a character on Tiny Toon Adventures.

Roderick is considered the leader of Perfecto Prep's various activities, and his persona is the opposite of that of Buster Bunny's.

In his first appearance, "Butt Out", Babs Bunny tries to make him and Rhubella see the drawbacks of smoking.

In "Bleacher Bummer", he was one of the batters in the baseball game finals, and when Furrball and Dizzy were trying to avoid capture from Arnold, (as a Security Guard.) the twosome (actually Dizzy) landed on Roderick, and Dizzy accidentally broke the bat exposing magnets. As proof of their cheating, Dizzy blew Roderick and the Perfecto Students out of the stadium.

In "Miniature Goof", Roderick and Rhubella had their own golf club but got under the jurisdiction of Buster and Babs. 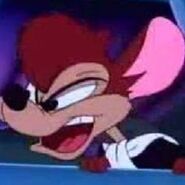 Add a photo to this gallery
Retrieved from "https://looneytunes.fandom.com/wiki/Roderick_Rat?oldid=140850"
Community content is available under CC-BY-SA unless otherwise noted.