Sam Cat is a character from the Looney Tunes series.

He is a clever orange cat, and Sylvester's rival, who first appeared in "Putty Tat Trouble".

He first appeared in "Putty Tat Trouble" as a non-speaking rival cat who fights Sylvester over possessions of eating Tweety. In "Tweet and Sour", he attempts to eat Tweety, but is foiled by a reformed Sylvester who saves the bird from his clutches in order to not risk getting the cruel punishment of getting turned into violin strings by Granny. He also served as the main antagonist in the first two Honeymousers cartoons "The Honey-Mousers" and "Cheese It, the Cat!", where he attempts to eat both Ralph Crumden and Ned Morton mice who attempt to raid the fridge. Back in his first four cartoons, he was rather depicted more as an unnamed, mute, generic orange cat with a bad eye (but with an eye-patch added in "Tweet and Sour") and with no personality aside from just being a stereotypical mean cat bent on eating mice or birds.

But starting with "Trick or Tweet", his personality became more dim-witted, and was given a voice by Daws Butler imitating Frank Fontaine. He is very intelligent and treacherous on issues such as food and hunt (to catch Tweety for example) as shown in "Mouse and Garden" with Sylvester. Though both Sylvester and Sam are often depicted as good friends, food actually gets in-between their friendship, as it turns the once-allied cats into sworn enemies.

In the third and final Honeymousers cartoon "Mice Follies", he does not appear to antagonize the Ralph Crumden and Ned Morton mice, instead he was replaced with an unnamed black cat with a similar appearance to his first four pre-Trick or Tweet appearances.

He also appeared in the 1993 Sega Genesis video game Sylvester and Tweety in Cagey Capers in the fourth and eighth levels as an enemy.

Sam in "Merlin the Magic Mouse" 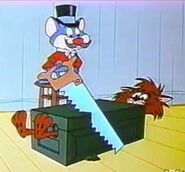 Sam and Merlin the Magic Mouse and Second Banana 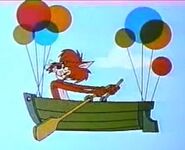