September in the Rain is a 1937 Merrie Melodies short directed by Friz Freleng.

One late evening while it's pouring outside, product logos spring to life. First, a bottle of Blueing sings "Am I Blue" as a figure on a can of coffee plays his instrument, causing the Tootsie Tooth Paste begin to dance around like a snake. The light on a can of searchlight begins to move about as many Old Maid Cleanser ladies dance together. A single rubber glove begins to do a Scottish-themed dance. Having to re-inflate himself after so long.

The camels on a pack of Carmel Turkish blend cigarettes march together. Then two thistles on bottles of Good Ol' Scotch begin to dance too!

Meanwhile, in the fruit, a little worm pops out of an apple in multiple spots, then hops out to investigate and check things out. A few chicks on boxes of My Ami? Powder then proceed to chase after it. One of the chicks manages to get the worm but the worm refuses to give up. Causing the small chick to bounce around and slither until it pops out of the little chicks mouth and quickly hops away and back into an apple.

More singing takes place as a river on a box of threaded wheat rains onto the Salt cans beneath it. The girl sings as she holds her umbrella. The boy on the box of Uneedum approaches to sing and dance with her. Then the man on Dream of Wheat (a caricature of Al Jolson) begins to sing and make conversation with Aunt Emma on the can of Pancake Flour.

After he finishes, two figures on Domingo and Tarrytown cigarettes dance with one another. Including dancing on top of matchboxes. Nearby two figures on the Gold Rust Twins Washing Powder tell the Biscuit chef to begin playing music. The Strong Arm baking soda arm hits the pan on the box of Kleenex as one of the gold rust twins begin to play the piano on the box of Piano Wax. The other one begins to sing as Aunt Emma begins to dance, soon finishing with a trumpet solo, as it's still raining outside the window.

One of many African-American caricature scenes cut from this short.

Another clip from the oft-censored ending.

A final clip from the oft-censored ending 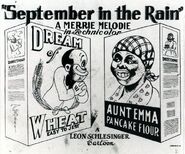 Retrieved from "https://looneytunes.fandom.com/wiki/September_in_the_Rain?oldid=206246"
Community content is available under CC-BY-SA unless otherwise noted.