The title is a play on the phrase "Ship ahoy."

Introduction: Like all Sam Sheepdog and Ralph Wolf shorts, this one revolves around Ralph Wolf trying to steal the sheep guarded by Sam Sheepdog. Unlike later episodes where Ralph will not attempt to steal any sheep until Ralph and Sam have officially started work, in this short Ralph uses the time between the shifts of the two sheepdogs to make his first move.

1. By the time Sam sits on the edge of his cliff to watch over the sheep, Ralph is already attempting to carry a sheep away. Sam casually pushes a rock over the ledge, which falls on Ralph's head. In a stupor, Ralph places the sheep on the ground and lets it go just before he falls unconscious and grows a large lump on his head.

2. Ralph next attempts to drop a large boulder on Sam, but a tree branch catches the boulder and propels it upwards again as it crushes Ralph.

3. Ralph's next attempt is to pole vault over Sam to get a sheep. Sam casually grabs the pole, lowers it over the edge until Ralph is eye level with Sam, and punches him in the face.

4. Next, Ralph attempts to sneak into the field by surrounding himself with a cloud of smoke from an ACME smoke bomb. Sam heads him off at the pass and drops a stick of dynamite in his smoke cloud. After the explosion, Ralph stumbles back in a cloud of black smoke. With his lack of vision and coordination, he accidentally falls off a cliff.

5. In Ralph's fifth attempt, he uses an Acme disguise. The box is labelled "Acme artificial rock. Have fun. Be popular. Be a rock!" Ralph attempts to sneak past Sam with the rock disguise, but Sam hits the fake rock with a sledge hammer. Ralph breaks apart into a number of pebbles which all move back into Ralph's cave.

6. Ralph's next attempt is to dive off a cliff while tied to a very large helium balloon and carrying a fishing rod to snag a sheep. As he casts his rod, he unwittingly snags his balloon with his fish hook and rips the balloon, sending him flying into the horizon.

7. Ralph then attempts to tunnel under the field. As he reaches up through the holes, he feels what appears to be four sheep legs strapped on to a large drum of TNT. Believing this to be a sheep, he pulls it into his tunnel. After the explosion, he places the riven drum back where it was sitting. Blackened and dejected, he refills his tunnel.

8. In Ralph's eighth attempt he swims through a stream with a pedal-powered submarine to catch a sheep which is taking a drink of water. As he swims, Sam holds a sign in front of his periscope which reads "DETOUR". After following the arrow on the sign, Ralph falls off a waterfall.

9. Ralph next attempts to propel Sam off his perch by placing an improvised teeter totter under Sam and dropping a rock on it from a large height. Unfortunately for Ralph, Sam is propelled straight upward toward Ralph's cliff, upon where he grabs Ralph by the neck and begins punching him in the face.

As in "Don't Give Up the Sheep", the names of the characters are inconsistent in this short compared to the rest of the shorts. At the beginning of the short, Sam the sheepdog is coming on duty to replace another sheepdog named Ralph. As the two pass, Ralph calls Sam "Fred". At the end of the short they reverse the names.

On ABC, part of the ending where Sam punches Ralph in the face was shortened (yet Fred doing the same to George was left alone). Also cut, at least from later broadcasts, was the scene where Sam drops a stick of dynamite into Ralph's smoke cloud, making it appear as though Ralph's smoke cloud exploded on its own.[1] 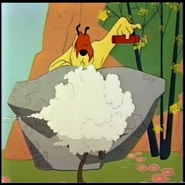 Title card (unrestored)
Add a photo to this gallery

The Bugs Bunny & Tweety Show
Add a photo to this gallery

Retrieved from "https://looneytunes.fandom.com/wiki/Sheep_Ahoy?oldid=241182"
Community content is available under CC-BY-SA unless otherwise noted.