Shop, Look and Listen is a 1940 Merrie Melodies short directed by Friz Freleng.

Little Blabbermouse is at J.T. Gimlet department store. He is on a tour of the shop. During the tour he keeps harassing his tour guide (resembling W.C. Fields) Turns out the store is having a sale and everything must go, including J.T. Gimlet. The tour guide shows them hosiery with no runs, no hits and no errors; a painting of Whistler's mother, who whistles "She'll Be Comin' Round The Mountain"; and The Thinker, who keeps thinking about his 1940 tax form: "Confidentially, I think" (that's a radio B.O. joke). They take at a look at some robotic ashtrays, and a robotic poker table which shuffles, deals and even cheats. Shoes include red and green mules. Finally, the tour guide wraps up Blabbermouse with a sticker over his mouth that reads, "Do Not Open 'Til Xmas." 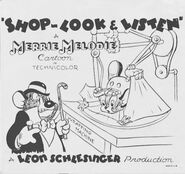 Retrieved from "https://looneytunes.fandom.com/wiki/Shop,_Look_and_Listen?oldid=205939"
Community content is available under CC-BY-SA unless otherwise noted.