Sidekicked is an episode of Taz-Mania directed by Douglas McCarthy.  It first aired 7 Nov 1994. 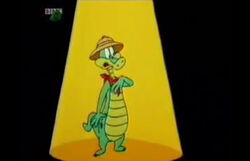 Taz is trying to catch, and eat, a small blue bird. Bull Gator is going away to compete in the Tazmanian Hula-Hooping Championship finals, so he leaves Axl alone with the trapping duties. He gives him a copy of his newly published manual, Bull Gator's You Too Can Trap Tasmanian Devils for Fun and Zoo-Going Children, to help. Axl tries some of the contraptions suggested by the manual, but each fails to catch Taz, who still has his eyes set on the little blue bird. When the bird lands on top of the manual, Taz swallows them both. Discouraged, Axl reveals that among his lifetime of educational achievments are graduate studies in biomechanical engineering, existentialism, perpetual motion, and a minor in video special effects, and launches into a soliloquy as he questions his purpose in life. He decides that his destiny is to be a sidekick so he makes his stand and reaches into Taz's mouth to retrieve the manual before acceding to Taz, who promptly eats him. Bull returns with a second-place trophy, and talks Taz into spitting Axl out.

Retrieved from "https://looneytunes.fandom.com/wiki/Sidekicked?oldid=167033"
Community content is available under CC-BY-SA unless otherwise noted.