Skippy Squirrel is the nephew of Slappy Squirrel in the show Animaniacs. He is the exact opposite of his cynical aunt, he is curious, and always willing to help. Even though he is the exact opposite of his aunt, Skippy admires her with cunning (and so-called) sweetness. During the original run of Animaniacs (1993-98), he was voiced by Nathan Ruegger, the son of the show's producer Tom Ruegger.

Skippy's personality was somewhat inconsistent from one appearance to another, alternating between the naïve innocence of a prepubescent child and the borderline cynicism of a young teenager. Skippy would regularly switch back and forth between characterizations from short to short, primarily depending on whether his role in the story was an innocent counterpoint to Slappy's crusty elder or as a co-conspirator with his aunt against the story's antagonist(s). Either way, Skippy was generally an energetic youth who eagerly spent time with his beloved aunt, for whom he had more than a little hero-worship as a star of the golden age of animation. Also, as revealed in Gimme a Break, he's a member of the Hair Club for Men.

Originally, Slappy Squirrel was billed as the sole star of the Slappy & Skippy shorts, being the only one mentioned in the brief opening sequence and theme song. Later, Skippy was added as co-star for a new opening sequence and expanded theme. Whatever his billing, Skippy was obviously always intended to be a principal character on Animaniacs, appearing in the show's opening credits as well as many sequences involving the main cast of the series.

One notable episode featuring Skippy was "Bumbie's Mom", an obvious parody of Bambi, in which Skippy is greatly disturbed after seeing "Bumbie's" Mom shot by hunters in the movie. Slappy then takes him to see the actress who played her, an old friend, to show that she is not really dead.

In the finale of the mix-up special, Skippy hasn't appeared as a major character in any of the mix-up episodes, but was seen briefly in the introduction of the mixed-up Slappy Squirrel theme with Dot Warner. Hip Hippo Flavio temporarily took his role.

His catchphrase in the show is "Spew!", usually a reaction to something gross or disgusting. 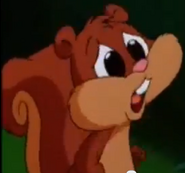