One night, Daffy Duck sleepwalks out of his house. Speedy Gonzales notices Daffy and yells at him to wake up, but Daffy falls into a pond. Speedy tells Daffy he has sleepwalked and offers for five pesos to help Daffy to sleep normally. Speedy's job is to ring a bell whenever Daffy walks out of the bed, but wanting to get some sleep as well, Speedy rigs the bell on a string to the bed. This works on the first attempt, but the second time, Daffy gets up on the other side of the bed and sleepwalks around the bed and out the house again into the ACME construction site.

Speedy wakes up to find Daffy gone. He frantically rings the bell to wake him up, but can't find him in the house. He finds Daffy at the construction site and tries to ensure Daffy is safe. He covers up a pitfall using a metal bar. Eventually, an ice cream merchant rings a bell, waking Daffy as he falls off the edge of the structure. Speedy brings Daffy a noose and suggests that he pull himself up. After crawling out, he activates a jackhammer and falls off the edge again. He grabs the minute hand of a clock, making the clock to go haywire and bop the hour hand on his head before exploding. After ricocheting to a canopy, it breaks off, and he falls down a telephone line. Speedy manages to save Daffy with a wheelbarrow and walks him back home. After Daffy reawakens, he thinks he had the worst nightmare, but Speedy says otherwise. 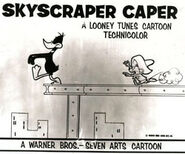