Slowpoke Rodriguez is a character from the Looney Tunes series. He is the slowest mouse in all Mexico. He is also the cousin of Speedy Gonzales, the fastest mouse in all Mexico. Despite his seeming physical deficiency, Slowpoke proves himself to be very cunning and virtually smart as Speedy is fast. He also shows very good gunfighting and hypnotism skills. He usually relies on Speedy to get away from Sylvester.

He first appeared in "Mexicali Shmoes" (1959), ends with two lazy cats, Jose and Manuel, the former learning the hard way that Slowpoke carries a gun (though the gun bit is often edited out in syndication in recent years). His second appearance, "Mexican Boarders" (1962), revolves around Speedy trying to protect Slowpoke from Sylvester, but in the end, Slowpoke demonstrates his ability to hypnotize Sylvester into becoming his slave. The other mice comment at this point that "Slowpoke Rodriguez may be the slowest mouse in all Mexico, but he has the Evil Eye!".

Slowpoke appears in The Looney Tunes Show episode, "The Black Widow" voiced by Hugh Davidson. Slowpoke is depicted as the Sheriff of Tacapulco. After Daffy Duck and Porky Pig are arrested for running nude in the streets, Sheriff Rodriguez allows them to make a call. As Daffy was unable to get through to Bugs Bunny (who was helping Lola Bunny return a diamond in museum), he asks Sheriff Rodriguez if he would mind that he tries to call someone else. Daffy gets through to Speedy Gonzales who speeds all the way to Tacapulco to negotiate their release. Once that was done, Sheriff Slowpoke invites Daffy, Porky, and Speedy to join in Tacapulco's fiesta. 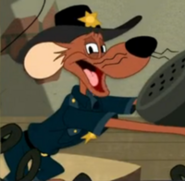 Slowpoke in The Looney Tunes Show. 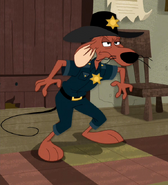