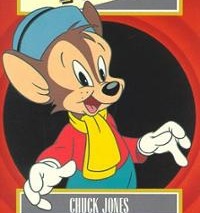 Sniffles is an animated cartoon and comic book character in the Warner Brothers Merrie Melodies series of cartoons and comics. He is the cousin of Li'l Sneezer.

Every cartoon except "Naughty but Mice" in his series was given a Blue Ribbon reissue and all were sold to Associated Artists Productions. "Hush My Mouse" was his only cartoon in the Looney Tunes series.

Director Chuck Jones created Sniffles as a potential new star for the studio in 1939. The character was designed by Disney veteran Charlie Thorson, an old hand at designing cute characters for Disney's Silly Symphonies. Thorson's design was highly derivative of a character he had designed for Disney in 1936, the country mouse from the Oscar-winning short "The Country Cousin". Both the country mouse and Sniffles are, in a word, cute.

Sniffles' head is almost as large as his body, which allows his infant-like face to dominate his look. He has large, baby-like eyes, a small bewhiskered nose, and a perpetual smile. His ears grow from the sides of his head, placed so as to hearken more to a human infant than to Disney's top star, Mickey Mouse. The character wears a blue sailor cap, blue pants, a yellow scarf, and tan shoes. His fur is brown with a light marking on his mouth.

Chuck debuted the character in the 1939 short "Naughty but Mice" (which is quite similar to Disney's "The Country Cousin" itself). In the cartoon, Sniffles has a cold and is searching for a remedy. He eventually stumbles upon an alcoholic cold medicine, drinks it, and becomes intoxicated. He then pals around with an electric shaver, which eventually saves him from a hungry cat. Sniffles is played by voice actress Margaret Hill-Talbot. According to the Toonheads episode "The Early Works of Chuck Jones", Sniffles received his name when Jones decided to give the little mouse a run-on cold.

Chuck went on to direct eleven more cartoons featuring the character, most of which showcase the naïvité of Sniffles by placing him in a dangerous world. For example, in "Sniffles Takes a Trip" (1940), a simple drive into the country turns into a nightmare as Sniffles is constantly frightened and awestruck by his surroundings.

Some of Sniffles' films pair him with a bookworm character who accompanies the mouse into a sort of fantasy land where books and toys come to life, such as "Sniffles and the Bookworm" (1939) and "Toy Trouble" (1941). Others simply focus on the inescapable sweetness of the character. In "Bedtime for Sniffles" (1940), for example, the little mouse struggles to stay up until Christmas to see Santa Claus. "The Brave Little Bat" was the last Sniffles cartoon Margaret Hill-Talbot did, and Marjorie Tarlton who did the voice of Batty took over the Sniffles voice role.

By the end of the series, Chuck transformed Sniffles into an incessant chatterbox who serves more as a nuisance than a cute main character. For example, in "The Unbearable Bear", Sniffles foils a robbery attempt by perpetually pestering the perpetrator. Chuck was moving out of his Disney-like stage by the late 1940s, and Sniffles was retired as the director took to funnier characters such as the Three Bears and the mice Hubie and Bert. The mouse's final cartoon was "Hush My Mouse" in 1946.

Sniffles quickly faded into obscurity in the animation arena. However, he would find new life in the Looney Tunes & Merrie Melodies Comics begun in 1940 by Dell Comics (cartoonist Chase Craig used several minor Warner Bros. characters to fill pages). These comics teamed Sniffles with a little girl named "Mary Jane" who could shrink herself to mouse size by sprinkling magic sand or simply by wishing it. Sniffles and Mary Jane would then adventure in a sort of magical toyland. Mary Jane soon surpassed the mouse in popularity, and she got top billing in later issues. Artist Roger Armstrong drew the series until Al Hubbard took over in the 1950s. These adventures proved a favorite with readers, and the series continued until 1961.

Sniffles also has cameos in the movie Space Jam (1996) and television series The Sylvester & Tweety Mysteries (1995). 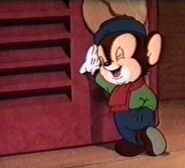 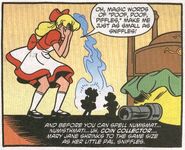 Sniffles in New Looney Tunes
Add a photo to this gallery

Retrieved from "https://looneytunes.fandom.com/wiki/Sniffles?oldid=202547"
Community content is available under CC-BY-SA unless otherwise noted.