Snowball is an episode of Pinky and the Brain, originally broadcast 20 January 1996.

As Brain is preparing for his latest scheme to take over the world, he is interrupted by the arrival of his old friend from before he become smart, a genetically altered hamster named Snowball. However those days are long gone, as Snowball has also became a genius, and the two have a race to see who can conquer the world first, but Snowball proves to be a better match than The Brain.

The Brain: While I developed my plans for world domination, Snowball had only evil in mind.

Snowball: What do you want?

The Brain: My friend, and my world.

Snowball tries to sway Pinky away with lies 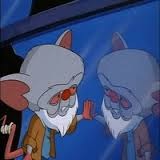 Retrieved from "https://looneytunes.fandom.com/wiki/Snowball_(episode)?oldid=194298"
Community content is available under CC-BY-SA unless otherwise noted.