Snowball is a cute genetically altered hamster and The Brain's ex-best friend. He too has aspirations of world domination, and Pinky and Brain are sometimes forced to foil his schemes. Snowball serves as the primary antagonist of the series. He is played by Roddy McDowall (deceased; 1995-1998).

He is despliced and returned to a normal hamster in "Brainwashed Part 3."

Snowball's tail is a stubby little thing, the same faded orange as his fur. He has jowls, pink eyes, and a large head similar to Brain's. His stomach, unlike the rest of his fur, is white.

He is highly intelligent due to the gene splicing and develops complex plans for taking over the world, though he will at times take Brain's ideas and implement them before he and Pinky are able to. 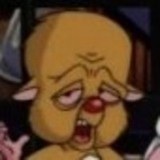 Add a photo to this gallery
Retrieved from "https://looneytunes.fandom.com/wiki/Snowball_the_Hamster?oldid=130723"
Community content is available under CC-BY-SA unless otherwise noted.