Sony Corporation (ソニー株式会社 Sonī Kabushiki Gaisha), commonly referred to as Sony, is a Japanese multinational conglomerate corporation headquartered in Kōnan Minato, Tokyo, Japan. Its diversified business is primarily focused on the electronics, game, entertainment and financial services sectors. The company is one of the leading manufacturers of electronic products for the consumer and professional markets.

During the 80s, the commercial features Bugs Bunny (on the Superbeta side), Elmer Fudd (on the old VCR side), and Porky Pig (at the end of the commercial). 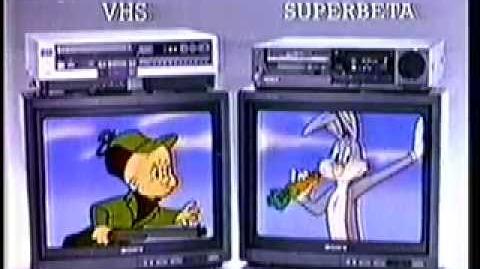 A number of Looney games have been produced for Sony's Computer Entertainment division's consoles:

Retrieved from "https://looneytunes.fandom.com/wiki/Sony?oldid=161541"
Community content is available under CC-BY-SA unless otherwise noted.