Space Jam: A New Legacy, also known as Space Jam 2, is an upcoming 2021 sports comedy film starring LeBron James and the Looney Tunes characters. The film is set to be a direct sequel to the original Space Jam which was released in 1996.

The film is directed by Night School director Malcolm D. Lee and is set to be released to theaters in the United States 16 July 2021 and digitally on HBO Max for a month on that same date.[1][2]

When basketball champion and global icon LeBron James and his young son Dom, who dreams of being a video game developer, are trapped in a digital space by a rogue artificial intelligence, James must get them home safe by leading Bugs Bunny, Lola Bunny, and the whole gang of notoriously undisciplined Looney Tunes to victory over the AI's digitized champions on the court.[3]

In February 2014, Warner Bros. announced a potential sequel set to star LeBron James. Charlie Ebersol was set to produce, with a script by his brother, Willie.[11] Representatives of James denied the claim that he would be involved.[12] In May 2014, James was quoted as saying, "I've always loved Space Jam. It was one of my favorite movies growing up. If I have the opportunity, it will be great."[13] In July 2015, James and his production company, SpringHill Entertainment, signed a deal with Warner Bros. for television, movies and digital content after receiving positive reviews for his acting role in Trainwreck.[14][15][16] On May 2, 2016, Justin Lin was said to be in talks to direct the sequel; co-writing the screenplay with Andrew Dodge and Alfredo Botello.[17] In August 2016, the Sneaker Bar Detroit company said that the movie is still in the works.[18]

In a November 2016 interview with Mr. Wavvy, Space Jam director Joe Pytka revealed that following the first film's success, he had been pitched a "really weird" idea for a sequel that would have starred pro golfer Tiger Woods, with Jordan in a smaller role. Pytka explained how the idea came from an out of studio script conference, with people who worked on the original film allegedly involved. Ultimately, nothing materialized from the idea.[19][20] Producer Ivan Reitman participated in similar interview with Mr. Wavvy, also in November 2016, in which he also revealed an idea he had for a sequel, though his sequel would have starred Jordan.[21] By August 2017, Justin Lin confirmed the film's oncoming production.[22]

Justin Lin mentioned in August 2017 that the movie was still continuing production, but the movie was in a clash with the Hotwheels movie to see which one gets released first.[23] 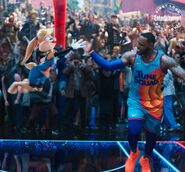 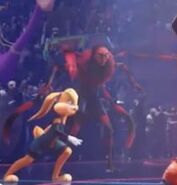 Retrieved from "https://looneytunes.fandom.com/wiki/Space_Jam:_A_New_Legacy?oldid=261507"
Community content is available under CC-BY-SA unless otherwise noted.