Spaced Out Bunny is a 1980 Looney Tunes short directed by Chuck Jones and Phil Monroe.

While walking in a forest, Bugs Bunny wonders aloud how everyone is out to get everyone else; this is illustrated by hostile behavior as Bugs' interacts with, among other things, a rock and a butterfly. He then sees a carrot and begins to eat it, unaware that it is a trap set by Marvin the Martian.

Marvin's purpose for capturing Bugs (with what Marvin explains is an "ACME Rack and Pinion Super Tranquilizing Carrot") is to provide a playmate for Hugo, the Abominable Snowman (from 1961's "The Abominable Snow Rabbit"). After Bugs awakens and realizes where he is, Marvin explains his rationale before turning Hugo loose on Bugs ("Oh no, not again!" cries Bugs, remembering his earlier encounter with Hugo). Hugo reprises his lines from "Snow Rabbit", including his intention to "hug him and squeeze him and name him George." Bugs regains the upper hand on his captors by suggesting to Hugo that he needs a robot; Marvin attempts to make a getaway but Hugo reaches into the spaceship and repeats his "I will call him George" lines. When an agitated Marvin demands that Hugo cease his behavior, an angry Hugo spanks Marvin.

Bugs then whispers in Hugo's ear, suggesting something that he would be good at. The scene cuts to Hugo's wrist, where he proudly displays his new "Mickey Martian" wristwatch. Bugs then climbs into the spacecraft and gets Hugo to practice his Frisbee toss by hurling the ship toward the Earth. 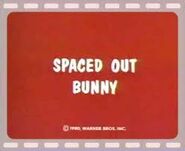 Retrieved from "https://looneytunes.fandom.com/wiki/Spaced_Out_Bunny?oldid=196808"
Community content is available under CC-BY-SA unless otherwise noted.