Speaking of the Weather

Speaking of the Weather

Speaking of the Weather is a 1937 Merrie Melodies short directed by Frank Tashlin.

It's midnight at a drug store, and suddenly the characters from the books and magazines inside come to life and get together for a musical. However, a thug from a magazine entitled The Gang Magazine attempts to rob a bank, using girls as a distraction, but he gets caught and sentenced to LIFE. Luckily, there's a magazine detailing the secrets of "Alacarazz", which he uses to get out of prison. Walter Snitchell oversees this and then alerts police, leading to a feud between the thug and the other magazines. The thug is arrested by Charlie Chan. 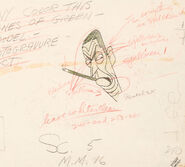