The title is a play on the 1943 film Stage Door Canteen.

Elmer hooks a carrot to his fishing hook in an attempt to catch Bugs, who turns the tables on Elmer by attaching the hook to his pants and "reeling" him in. Bugs then throws Elmer back for being too small and ends up getting chased to a Vaudeville theater. Bugs gets a chance to do his tap-dance routine, one of his recurring schticks. He then tricks the shy Elmer onto the stage, forcing him into performing a high-diving act. He prompts Elmer through some classic acting emotive poses, segueing into face-making, which draws a ripe tomato in the face from the jeering crowd. Then he tricks Elmer into doing a "strip-tease." Finally, Bugs disguises himself as a southern sheriff, just as a real one arrests Elmer for indecent exposure. Before leaving the theater, a Bugs Bunny cartoon begins on the movie screen and the sheriff decides to stay and watch it. Elmer appears to get wise when the cartoon shows the scene where Bugs disguises himself as the sheriff. Elmer, thinking the sheriff really is Bugs, calls the sheriff an "impostor" and pulls off his clothes, but to Elmer's surprise, finds out he was really sitting next to the real sheriff. The sheriff proceeds to lead Elmer out of the theater with his rifle, "You'll swing for this, suh!" Bugs conducts the orchestra into a big finale.

A Yosemite Sam-like sheriff arrests Fudd in his underwear. 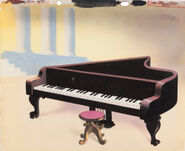