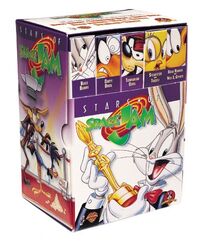 Stars of Space Jam is a collection of Looney Tunes VHS tapes released 26 November 1996 to promote the release of Space Jam. A Japanese LaserDisc of this set was released around the same time. Each tape/side featured six cartoons, most of which had not been made available on home video before. This was also notably the first video series with a video featuring the Tasmanian Devil. The series was discontinued around the time the Looney Tunes Presents video series came out.

Each tape in this series began with a short version of the "Warner Bros. Family Entertainment" logo as seen on Warner Bros. Animation's cartoon shows (albeit with a short Merrie Melodies fanfare).

DVD editions released 9 October 2018, with some slight changes to the Bugs and Daffy releases.

All five DVDs were combined onto the single-disc Stars of Space Jam Collection Volume 1 in 2019.

Dubbed 1997 version disclaimer seen at the end of non-US televised prints of cartoons from the Stars Of Space Jam tapes. Note that the dubbed version font used differs from the other 1997 dubbed versions seen on TV and the Bugs & Friends European VHS tapes. This dubbed disclaimer here is as long as Turner Entertainment's 1995 dubbed versions, since these shorts do not survive their original music-and-effects track and have a new dub track made with music cues from other cartoons. Screenshot taken from "Homeless Hare" from an airing on Cartoon Network Japan.

Another variant of a Dubbed 1997 version disclaimer seen at the end of non-US televised prints of cartoons from the Stars Of Space Jam tapes. This dubbed disclaimer here is quite short, since these shorts' dub track survive their original music-and-effects track but had new sound effects (from other cartoons) added in to replace some of the lost original sound effects. Screenshot taken from "Holiday for Drumsticks" from an airing on Boing Spain.