Sugar and Spies is a 1966 Looney Tunes short directed by Robert McKimson.

While chasing Road Runner, Wile E. Coyote is hit with a briefcase thrown from a crook's car in a police chase. The briefcase is actually a spy kit containing gadgets that Wile E. tries to use on Road Runner, but which all fail as usual, including:

Sleeping gas: Road Runner dodges the gas and blows it back at Wile E., who sleepwalks off a cliff. The Road Runner places the alarm clock right beside the hole at the bottom of the gorge. Wile E. simply puts a hand out to shut it off.

Do-it-yourself time bomb that Wile E. mails to Road Runner, but is returned to the Coyote by Road Runner disguised as a mailman for insufficient postage. As Wile E. takes the package back into his cave for an extra stamp, BOOM!

Explosive putty which is applied under a huge bolder with a mound of bird seed placed nearby. Wile E. hides behind another boulder farther away and lights the fuse, only to be crushed by the flying boulder.

Spy car equipped with machine guns, ejection seat and cannon: The bullets from the machine guns ricochet off a bolder and blow away the car top, the Coyote ejects himself from the car while suspended upside down, and the force from the cannon sends the car backwards, running over the Coyote who then tries to dodge the cannonball. 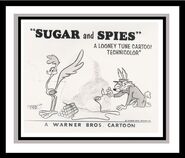