Sunday Go to Meetin' Time is a 1936 Merrie Melodies short directed by I. Freleng.

Ringing bells in a lazy town announce that it is time to go to church. A black preacher with caricatured enormous lips greets his parishioners as he sings the song for which the short is named. A minstrel show dandy and his gal jazz up the song as they dance their way to church. A succession of gags featuring stereotyped black characters follows: a mammy and old uncle shine the heads of picanniny children; a woman steals a bra off a clothesline to use as a bonnet for her twin children. Lindvall notes that mammies were "ubiquitous in films dealing with black culture".

His mammy wife finds Nicodemus playing dice. She exclaims, "You good for nothing! Get yourself to that church. The Devil's gonna get you sure as you're born!" and drags him off by the ear. Nevertheless, Nicodemus slinks out the door, opting to steal some chickens instead. A knock on the head sends him to the "Hades Court of Justice". A demon there reviews his crimes: "Shooting craps, stealing chickens, missing church, raisin' dickens!" and sends him deeper into hell. Big-lipped demons carry him to the Devil himself, who sings to Nicodemus that "you've got to give the Devil his due." The boss orders some demons to "give 'em the works," but Nicodemus wakes to find the prods of pitchforks are really the pecks of chickens in the land of the living. He hears the church bells and makes haste to the meeting house.

Being part of the "Censored Eleven", this cartoon has never had an official video release. An upcoming Censored 11 DVD was going to be released, however, this release has been held back indefinitely as of March 2012. 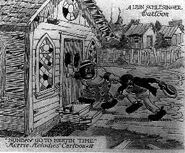 Bootleg
Add a photo to this gallery

Retrieved from "https://looneytunes.fandom.com/wiki/Sunday_Go_to_Meetin%27_Time?oldid=201586"
Community content is available under CC-BY-SA unless otherwise noted.