Super-Rabbit is a 1943 Merrie Melodies short directed by Chuck Jones.

"Look! Up in the sky! It's a boid!" "Nah, it ain't a boid, it's a dive bomba!" "No! It's Super-Rabbit!" "Faster than a speeding bullet", in this case, a cork popped out of a gun, "More powerful than a locomotive", a "choo-choo" train, "able to leap tall buildings in a single bound", though Bugs trips when he reaches the top and falls frantically as soon as he clears the building. Bugs is "Super-Rabbit, The Rabbit of Tomorrow!"

Professor Cannafraz is in his lab creating a "super carrot". Bugs is his test subject, and immediately wolfs down the carrot, which now gives him super-abilities, such as invulnerability and flight... but only temporarily. He must eat another one from time to time, to replenish his powers. Bugs pulls out a newspaper article about "Cottontail Smith", a hunter in Texas who wants to hunt down all rabbits. Seeing a need, Bugs gathers up the super carrots, stashes them in a cigarette case, gives the professor a kiss on the nose and flies off. Bugs flies past a horse who happens to be sauntering in the middle of the air, with the horse turning to the camera and going, "A rabbit? Up HERE!?"

Bugs flies to "Deepinaharta Texas", and assumes a disguise as a "mild-mannered forest creature" complete with oversized glasses and hat. He soon encounters Smith and starts to have fun with him, switching Smith with his horse. When Smith tries to shoot Bugs, he finds than none of the bullets penetrate him. Bugs hands him a cannonball, eats another carrot, "Just a precaution," then plays basketball with the cannonball. The bemused Smith and his horse are soon outwitted by Bugs, but they don't give up. The pair fly into the sky in an airplane, try swooping in on Bugs, but soon find themselves piloting a control stick and the top window of their plane - and nothing else.

Bugs runs out of power, but when he tries to recharge by eating another carrot, he fumbles his cigarette case and the carrots all fall to the ground. When Bugs lands on the ground, he opens his eyes to see a line of eaten carrots - both Smith and his horse are now superheroes. Bugs then says "This looks like a job for a REAL Superman!" He ducks into a phone booth, and both Smith and the horse are ready to attack - until the booth opens and they both snap to attention and salute. Bugs marches out in a Marine uniform, singing the Marines' Hymn, pausing to say, "Sorry, fellas, I can't play with you anymore. I got some important work to do," before marching off towards a sign pointing to "Berlin, Tokyo and points East" while finishing the Hymn. 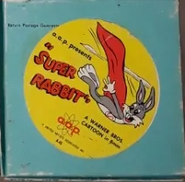 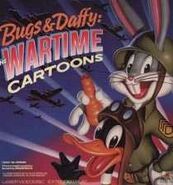