TV or Not TV was the sixth episode in season one of Pinky and the Brain which was first broadcast November 19, 1995. It was produced at AKOM.

Brain invents dentures that gives him a smile which can hypnotize anyone that sees them without sunglasses. He goes on to attempt to become a celebrity (a stand-up comic specifically) in order to achieve mass population control. When starting out on his first show, he uses the jokes used by other comics, which gets him instant boos. But when he starts insulting the audience, everyone bursts out laughing, showing the benefits of his friendship with Pinky (also a subtle reference to the snide comments Groucho Marx made at a show, launching the Marx Brothers' career as comics).

The Brain is about to get his own show however the TV executive, who is going under hypno-therapy which causes him immense pain when a certain word is said, watches their act when The Brain says that certain word a dozen times. 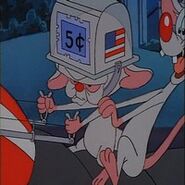 Sometime after the first airing of this episode, part of Brain's line as he enter's Killmer's office was partially cut for unknown reasons. The line in question is "Killmer, babe! Glad to see us?" On repeats, it was reduced to "Glad to see us?"[1]

Retrieved from "https://looneytunes.fandom.com/wiki/TV_Or_Not_TV?oldid=194342"
Community content is available under CC-BY-SA unless otherwise noted.