Taz-Manian Theatre is an episode of Taz-Mania directed by Gary Hartle.  It first aired 14 Sep 1994.

The title is a play on the PBS show Masterpiece Theatre.

Mr. Thickley narrates (as on Masterpiece Theatre) that in chapter 38, Taz and Wendal T. Wolf find that they are stranded on a remote island. A phone rings from within a palm tree, but Taz eats it. Wendal dislikes Taz's slobbiness and tries to clean up Taz's footprints on the beach (as music reminiscent of The Odd Couple theme plays in the background). Wendal finally loses it and scolds Taz up the palm tree, which flings them across the sea to safety, on another island. Mr. Thickley interviews Taz to end the show. 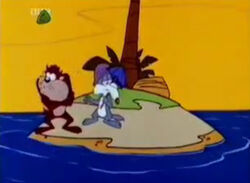 Retrieved from "https://looneytunes.fandom.com/wiki/Taz-Manian_Theatre?oldid=136786"
Community content is available under CC-BY-SA unless otherwise noted.