Taz: Wanted is an action-adventure video game released in 2002 for the PlayStation 2, the GameCube, the Xbox, and Microsoft Windows. The game was developed by Blitz Games and published by Infogrames. The game features the Looney Tunes character the Tasmanian Devil.

Taz and She-Devil are feeling romantic at Taz Island. Suddenly, the two see a large shadow in the sky, and the two are captured by Yosemite Sam, held captive in Sam's Zoo, otherwise known as Yosemite Zoo. Sam, during this time, is advertising the zoo, showing off Taz and She-Devil. When Taz attempts to break out of his cage in the middle of the zoo, Sam has She-Devil moved to a safer area of the zoo, so that both Taz and She-Devil cannot escape. After Taz escapes from his cage, Sam has his "Taz Catcher" workers put up wanted posters (hence the game's name) to help catch Taz. Soon afterward, Tweety helps Taz out as a sort of help character, telling Taz to follow the tutorials around the zoo.

Taz then heads to the game's first level, Zooney Tunes, a play on the name Looney Tunes. When Taz has destroyed all seven of the wanted posters in the level, (necessary to advance the game), he then takes an elephant along with him out of the level, which will eventually help him reach the boss level. Once Taz has beaten the first level, he can now proceed to beat the other two levels, Ice Burg and Looney Lagoon. After completing those two, Taz then uses the objects from the previous levels, (an elephant, a snowblower, and a life raft) to enter the area where Sam hauled She-Devil away, beginning the game's first boss battle.

In the battle, Sam has Gossamer attempt to beat Taz in a game of Elephant Pong (name of the level) in order to capture him. When Taz wins, Sam has his crew fall back, and haul She-Devil away again. Taz chases after them, and reaches the town of "Sam" Francisco. After Taz evades capture again, Sam tells Taz that in order to rescue She-Devil, he has to go to a game show called Gladiatoons to win her freedom. After gaining access to a giant hot dog sausage, a giant, neon shopping trolley and a cement mixer from the levels, "Samsonian Museum," "Looningdale's", and "Bank of Samerica," he heads straight for the Gladiatoon match.

After beating out the competitor, Daffy Duck, during the boss battle, Taz is not reunited with his love, but is transported to the Old West, where he must beat the levels, "Granny Canyon," "Cartoon Strip Mine," and "Taz: Haunted" in order to get a mine cart and a boulder to access the next boss, which happens to be Sam in a giant explosives warehouse. During the battle, Sam attempts to blow Taz up using dynamite, causing the entire cache of explosives to do just that, explode. The explosions are so great that they hurl Taz into outer space, before he lands back on his island, only to discover that Sam is trying to build a theme park there, which Sam mentioned when Taz first escaped. Later, Taz catches up to Sam in a volcano. After trying to get rid of our hero by dipping him into the lava, he attempts to destroy the entire island, again with explosives. After Sam's defeat, the plot takes a final anticlimactic twist, with Yosemite escaping with a jetpack.

Having had enough for the moment, Taz and She-Devil are raised into Sam's blimp. However, Sam had been placed out of the picture, so who was controlling the craft? To our Devil's astonishment, it was Tweety's idea to construct 'Tazland A-maze-ment Park' all along; Sam being a mere puppet. The two begin to duel, Tweety being in a large robotic suit, while Taz must use crates to eat and spit at Tweety's weak points during the battle. The game ends with Taz activating the blimp's rear cargo door, pushing Tweety and his robot out, falling a large height. While She-Devil had been trying to figure out how to pilot the blimp, Taz accidentally destroys the control panel, causing the craft to crash on the island. Both emerging groggily from the wreckage, She-Devil rants and hands Taz a broom. Then he gets ticked off at what he perceives as ingratitude.

"Taz No Maid!" Was his final remorse.

Taz: Wanted has four areas, the first three having the same basic blueprint. There are three levels in each area, each level having seven wanted posters of some variety that must be destroyed with some technique. Once all seven posters are destroyed, a scene will show an area of the level in which something happens that will help Taz get to the new area, such as a gate opening or something breaking. In the new area, Taz gets his hands on something and somehow manages to get it and him back to the HUB. Once the three things are acquired for the area, they can be used to enter a boss arena. The only exception for this is the level Taz Land, in which nothing is brought back, and the final area, with only one level and two bosses. Once the boss is defeated Taz is either blown, shipped, or chased to the next area. To travel between areas, a misplaced door is placed in each one which transports you to Planet X with all the other doors Taz can travel through.

World 2 - Sam Francisco: Taz escapes from the zoo and travels to the city where he finds that the Tasmanian She-Devil has been taking to the Gladiatoons Stadium and acts as a prize for winning the game. But to enter the stadium, Taz will need to find 3 things to help him get inside:

And a cement mixing cannon

World 3 - Wile E. West: The third world in which the Tasmanian She-Devil gets taken to a Warehouse across the Canyons. To get to the warehouse, Taz will need to cross over the canyons. The mine cart tracks lead directly to the warehouse except: there are 3 things you have to do:

2.) Find a Mine Cart fast enough to cross the canyon.

3.) And finally, find a way to get rid of the bumpers.

Taz: Haunted: A haunted desert level has Taz trying to find a way to raise the gates.

Cartoon Strip-Mine: A mine level in which Taz must traverse through to find all 10 Wanted Posters and destroy them. ACME Jet-Powered Mine Cart can be found at the goal.

Granny Canyon: Based on the Road Runner Cartoons, Taz will travel through a desert highway canyon. Wile E.'s den can be found here as well as some of his traps. Traps include cartoon heavyweights, fake tunnels, a giant cannon, oil slicks, a human-slingshot and a catapult. The catapult acts as a goal and helps Taz out with his bumper problem.

World 4 - Taz Land: This world is the final world in which the last 10 Taz Posters can be found. Upon destroying all 10 of them, Taz will gain entrance to Sam's HQ Lair, located inside of a volcano at the very top of the mountains.

Disco Volcano: Sam accidentally iniciated the Self-Destruct Sequence on his lair after a failed attempt to catch Taz with a trapdoor. Now he wants to blow up Taz's home manually with a detonator. To stop Sam, just blow fire whenever he's on a detonator.

The Hiden-bird: After defeating Sam, Taz attempts to save his sweetheart only to get shanghaied on Sam's Blimp, which is now in the control of...

Ooooooh... I tawt I taw a Tweety Bird!

As it turns out, after helping you out on your journey that it was Tweety Pie's Idea to build Taz-Land Theme Park all along. The Final Battle has Tweety riding in a robo-suit and the battle has 3 phases.

Maps of Various Levels can be viewed through via pause menu screen.

While collecting bounties by destroying wanted posters, collecting Sam Statues and destroying various objects, you are sometimes awarded with concept art, model sheets and in-game design screencaps that featured in the Extras. The completed collection is here by Gallery Order:

Need help with this one.

Was nominated for 2002 BAFTA award in category 'Best Children's Entertainment.[1]' 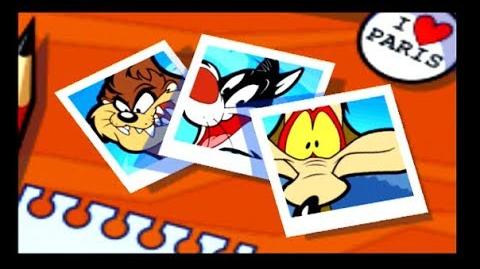 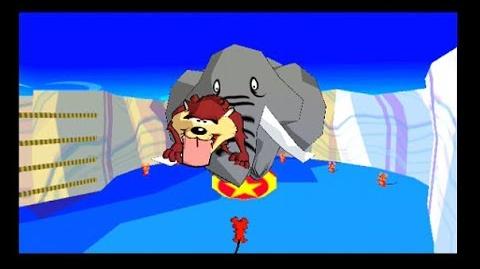 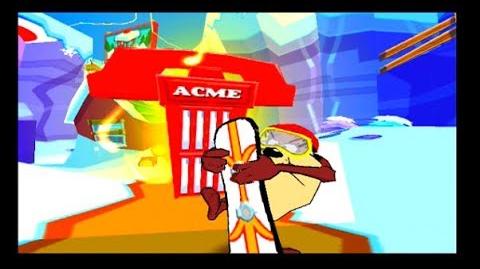 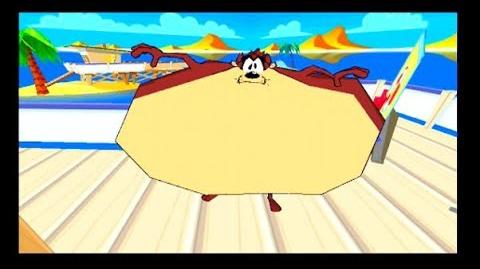 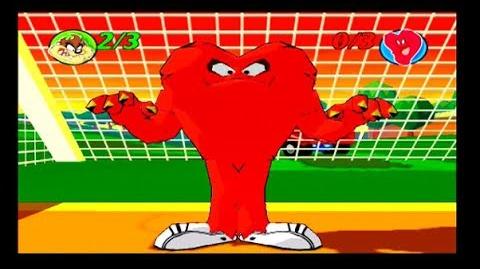 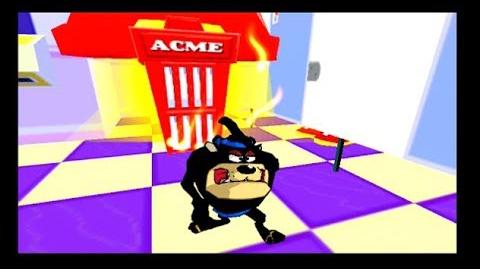 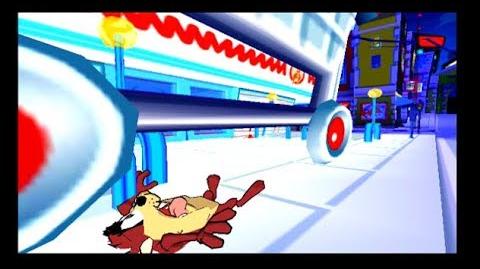 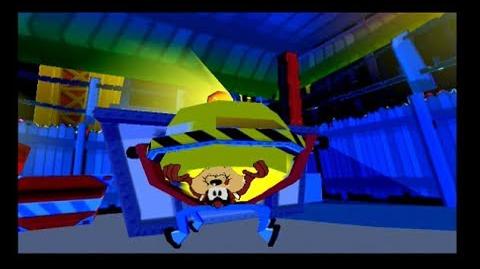 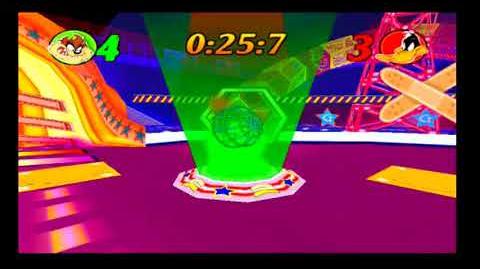 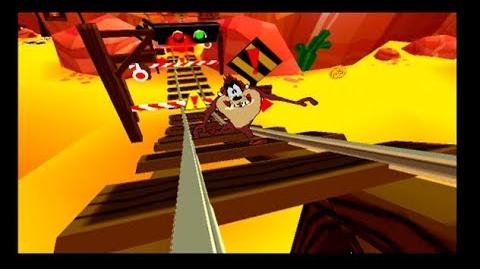 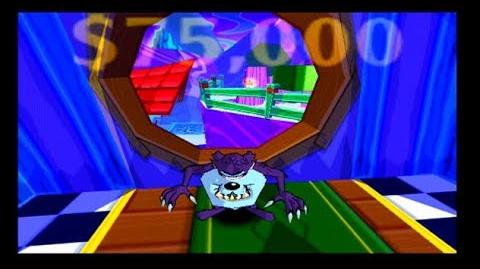 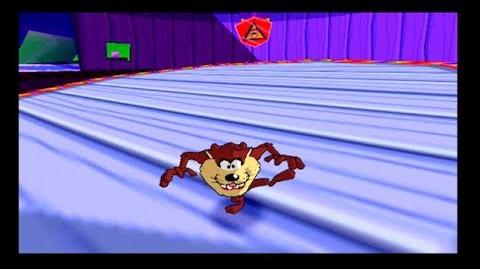 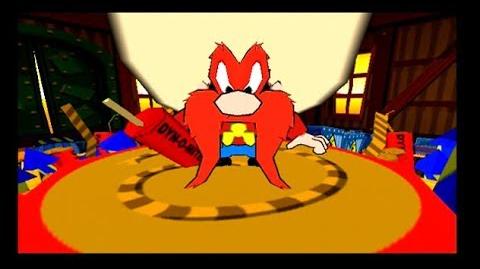 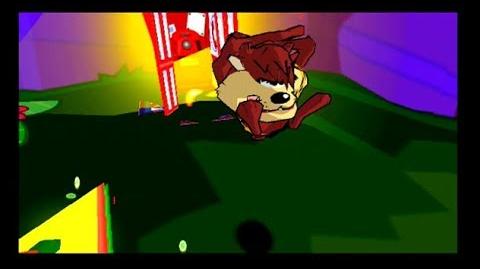 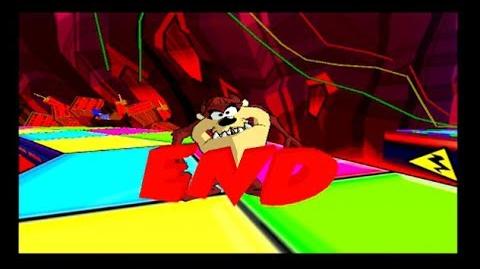 Retrieved from "https://looneytunes.fandom.com/wiki/Taz:_Wanted?oldid=207916"
Community content is available under CC-BY-SA unless otherwise noted.