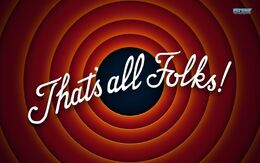 That's all Folks! (also known as "So Long, Folks!" in the early Merrie Melodies cartoons) is the Looney Tunes signature closing sequence. It was first used by Bosko and more commonly by Porky Pig in the Golden Age of Animation, before the standard script logo on the bullseye color rings came to use. It had many variations over the years, depending on the situation, which is similar to the Couch Gag opening of The Simpsons, and the Day Is Saved closing of The Powerpuff Girls.

Bosko was the first character to say the phrase starting with the first official Looney Tune, "Sinkin' in the Bathtub". His cartoons ended with him running in front of a sign reading "A Looney Tune" and saying, "That's all, folks!"

The Merrie Melodies of the same time would feature the star of the cartoon running in front of a drum reading "A Merrie Melody", only they would say "So long, folks!" Unlike Looney Tunes, these would change with every cartoon until 1934. In 1934, starting with "Those Beautiful Dames", a jester would announce the "That's all, folks!" sign off for every Merrie Melodies cartoon up to "Flowers for Madame".

In 1933, Buddy became the star of Looney Tunes and he adopted that "That's all, folks!" sign-off. In 1935, Buddy was dropped, and Beans began signing off with the phrase.

It wasn't until 1936 that both series started to use the now-famous script sign-off. The Looney Tunes shorts depicted the text being written on a black background (starting with "The Phantom Ship"), while the Merrie Melodies had it written over the bullseye (starting with "I Wanna Play House").

1937's "Rover's Rival" made history by introducing Porky Pig's now-iconic sign-off. As an instrumental version of "The Merry-Go-Round Broke Down" played in the background, Porky Pig would pop out of a drum and say "Th-th-that's all, folks!" This was used until 1946, when the Looney Tunes series too adopted the standard script logo on the bullseye like Merrie Melodies. "Hush My Mouse" was the last cartoon to use this sign off.

Starting in 1964 (beginning with "Señorella and the Glass Huarache"), the opening and closing titles were redesigned and the phrase was dropped for both series. This change stuck until the series ended in 1969.

The phrase has returned in most Looney Tunes productions from the 1970s onwards.

Porky Pig returned to signing off the Larry Doyle-produced Looney Tunes in 2003.

The Looney Tunes Show featured its own variations on the gag.

1995 dubbed versions for most cartoons that don't credit Schlesinger, the BR 1945-56 reissued shorts, and the non-reissued 1944-48 shorts. Note that cartoons originally released back to 1935 were reissued cutting Schlesinger's name, thus having this ending card.

Abstract ending used in "Now Hear This", "Bartholomew Versus the Wheel", "Señorella and the Glass Huarache", and "Pancho's Hideaway"

Invasion of the Bunny Snatchers

Looney Tunes: Back in Action

Example of a Bosko signoff from his last WB cartoon, "Bosko's Picture Show"

"I've Got to Sing a Torch Song"

"Those Were Wonderful Days"

"Goin' to Heaven on a Mule"

"Why Do I Dream Those Dreams"

"The Girl at the Ironing Board"

"Beauty and the Beast"

Finalized Jester signoff from "Into Your Dance"

Finalized Jester signoff from "I Haven't Got a Hat"

"The Major Lied 'Til Dawn"

Ending of "Stop! Look! And Hasten!" where the Road Runner writes out the "That's all Folks!" signature in smoke

"Boulder Wham!". Wile E. holds up this sign before becoming subjected to gravity once more.

From the beginning of The Bugs Bunny Road-Runner Movie: Bugs interrupts the signoff to tell the audience that, no, that's not all, folks.

The Road Runner video arcade game. This appears if you lose all of your lives, so it functions as a game over screen.

"Duck Dodgers and the Return of the 24½th Century" 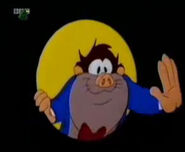 Daffy: Can I interest you in a muffin? I ate half of it. It's not very good.

Bugs: And that's the end.

Cecil: That's not all, folks. I'm gonna get out of here. And when I do, watch out, Beaugs Beaunny!

Lola: Ah! (cracks the camera) Sorry! I thought there was a spider on you!