The Abominable Snow Rabbit is a 1961 Looney Tunes short directed by Chuck Jones and Maurice Noble.

The title is a play on the phrase and 1957 horror film The Abominable Snowman.

Bugs burrows through the Himalayan mountains, followed by Daffy Duck. After a failed attempt by Daffy to go swimming in a frozen pond, the two realize they are not in Palm Springs, and Bugs works out they are in the, as he puts it, 'Hime-a-lay-as'. Daffy corrects him on the pronunciation, then realizes where they are. Angry, he gets back in the tunnel, and heads for Perth Amboy. But he misses a sign, which, in pseudo-Oriental writing, reads 'Beware of the Abominable Snowman'.

Daffy, whilst underground, crashes into said creature's foot. The Abominable Snowman grabs Daffy, names him George, and gives him crippling hugs, believing Daffy is a rabbit, when actually he just tied his sweater round his head for warmth, with the sleeves on top. Daffy reveals this, and 'George' is punished for his 'deception' with spankings. However, Daffy imparts to him where he can find a real rabbit, namely Bugs. As Bugs starts experiencing Hugo's tough love, Daffy sneaks away.

Hugo sits on Bugs like a hen, so he 'doesn't feel rejected.' Bugs tunnels out next to Daffy. His tunneling pushes Daffy to Hugo. Bugs tells Hugo that he now has a rabbit. Daffy and Hugo agree that a rabbit has long ears. But Bugs cleverly pulls his own ears down, and puts his fingers behind Daffy's head. Hugo begins petting Daffy, but then realizes rabbits don't have feathers nor bills. Daffy points out the tunneling Bugs to Hugo, who chases him underground. In a hot climate, a profusely sweating Hugo, and a disguised Bugs, discuss Hugo's failure to catch Bugs. Daffy pokes his head out of the hole. Bugs puts fake ears on him, and gives him to Hugo. But Hugo has melted, for he really was a snowman. 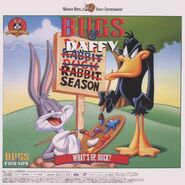 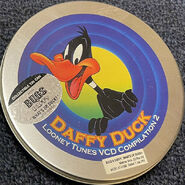