The Bee-Deviled Bruin is a 1949 Merrie Melodies short directed by Chuck Jones.

The title is a pun on "the bedeviled bruin", which the word "bedeviled" means to cause great and continual trouble to a person, while the word "bruin" is another name for a bear, especially in children's fables.

It's breakfast time, and the Three Bears are sitting down to eat. Junyer is about to eat several slices of toast with honey but Pa smacks his hand with a butter knife as if to say "don't you dare eat all the honey." Junyer takes one slice but globs all the honey on top of it. Pa, annoyed, looks in the jar to find that there isn't any left. Angry and in a fit of rage, he looks as Junyer is about to eat it all and punches him. He marches outside with the empty jar to get more, as Mama asks him where he's going. She tries to tell him something but Pa just tells her to "shaddup!"

Outside, Pa and Junyer are looking up at a beehive, high up in a tree. Pa steps on an extending ladder and Junyer makes it go all the way up past the beehive. Junyer lets go of the lever, at which point the ladder quickly falls back down and breaks into pieces. Angry, Pa pops out of the rubble. Junyer tells him he didn't get any honey. Pa punches Junyer.

Next, Pa tries giving Junyer a boost but ends up making Pa sink into the ground. Junyer pulls Pa out of the hole and says he isn't high enough to reach the hive, and gets punched by his angry father again. He makes Junyer boost him up but Junyer uses so much force that he launches Pa all the way up in the air, and he lands in the garden shed. He dizzily walks back over to Junyer and tries to punch him but misses and falls on the ground. Junyer thinks Pa may have died so he picks his arm up only to get punched again, wincing in pain.

Next, Pa steps on a wooden see-saw while Junyer holds the jar of honey, sitting on the other end. Because of Junyer's height and weight holding the other end down, Pa only bounces up to the branch with the beehive, hitting his head in the process, several times.

Later, Pa enlists Ma to help. She stands on his shoulders, while Junyer stands on her shoulders. Junyer successfully fills the jar with honey, not knowing that it also had bees in it, and they run back into the house while Junyer exclaims that he did a good thing. Pa is about to eat his breakfast but five bees pop out between the two slices of bread. Afraid to eat it, Pa hands the sandwich over to Junyer and he eats it. Pa watches with a "he's going to get it" look, and Junyer starts to make buzzing sounds. Pa once again punches him.

Later, Junyer is holding onto a wooden stilt pole which Pa is standing on, at the beehive. He holds out his spoon and jar but a bee flies out of the hive and lands on Pa's nose. Nervous, Pa lulls the bee to sleep by "buzzing" "Rock-a-bye Baby". He gestures for Junyer to get the bee off his nose, but Junyer smacks Pa in the face with a nearby shovel. The bee falls to the ground and Junyer proudly picks it up only to meet his angry father. Pa puts the bee on Junyer's nose and smashes his face with the shovel with great force.

Next, Pa makes Junyer tightrope walk over to the beehive on a power line. Junyer is too heavy for the wire so Pa tells him to get off. As soon as he steps off, the wire shoots back up and smacks Pa in the face. Pa trios this next, and Junyer watches, bored, and sees the voltage switch. He flips the switch, which electrocutes Pa, sending him flying, and landing on the ground. Junyer sees this as an opportunity to turn Pa into a lamp, by twisting two light bulbs in each ear and putting a lampshade on his head. Junyer excitedly brings the "lamp" into the house, to a confused Ma. Pa switches himself off and takes the lampshade off his head. In a fit of rage, Pa punches Junyer, almost smacks Ma, and runs into the closet and emerges with two knives strapped to his legs. Ma once again tries to tell him something but Pa won't listen. Pa easily climbs up the tree to the hive but ends up getting chased by an angry swarm of bees, all the while getting stung. He runs back into the house in the nick of time, with a very swollen face.

Pa finally admits defeat and sits at the kitchen table later, with his face bandaged up, in front of a plate of bacon and eggs. He demands ketchup and Ma obliges. Ma opens up a cupboard with many jars of honey and one bottle of ketchup. Pa cannot believe what he sees and becomes furious and scaring Junyer, who claws at the wall in fright. Ma tries to explain that she tried to tell him that they had plenty of honey. Pa jumps onto the cupboard, only to have it fall on top of him, breaking most of the jars and getting covered with honey. Pa emerges from the mess and tearfully says "what did I do to deserve such a family?" Then another bee flies over and lands on Pa's nose. Pa, while still crying, once again lulls the bee to sleep while "buzzing" "Rock-a-Bye Baby". Pa gets his face smashed with the shovel again by Junior.

When The WB retitled their Looney Tunes installment show That's Warner Bros.! to Bugs 'n' Daffy in season two, this cartoon was replaced with other shorts due to scenes of excessive violence -- often with a child at the receiving end -- and scenes of reckless and dangerous behavior that could be copied in real life by impressionable viewers, such as Junyer getting hit in the face with a shovel, Junyer electrocuting Papa Bear as he's walking on an electric wire like a tightrope, and Papa Bear messing with a beehive.[2] Despite this, this short has aired uncut on cable networks such as Nickelodeon, Cartoon Network, Boomerang, and MeTV. Currently, the short is on the Boomerang streaming app and was on WarnerMedia RIDE's streaming service. 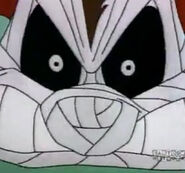 Papa Bear with a nightmare look on his face 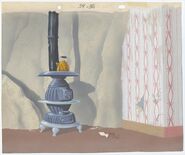