The Big Snooze is a 1946 Looney Tunes short planned by Bob Clampett and finished by Arthur Davis.

The title was inspired by the 1939 book The Big Sleep and its 1946 film adaptation, also a Warner release.

Bugs and Elmer are in the midst of their usual hunting-chasing scenario. Elmer angrily quits, because he feels the writers will not "allow him" to catch Bugs.

Elmer decides to go fishing instead, thinking that he will not be around anymore rabbits, including Bugs. He was wrong, as Bugs follows Elmer to his fishing spot and sees him sleeping.

Bugs worms his way into Elmer's dream by taking sleeping pills and lying next to him in order to torment the inept hunter with nightmare imagery; Bugs chooses 'zillions of red and yellow wabbits' to start off the agony. Later, Bugs runs Elmer over with a "train" made of rabbits. Elmer's failed pursuit of the "wabbit" through the surreal landscape, as well as down connected rabbit holes, allows Bugs to dress Elmer in drag, making Elmer look like Rita Hayworth.

Bugs inspects his handiwork, then introduces Elmer to a trio of literal wolves, lounging by the sign at Hollywood and Vine. Upon noticing "Elmer", one wolf cries out, "How-ooooold is she?" Another wolf begins flirting with Elmer, causing the gender-morphed Elmer to exclaim "Gwacious!", and flee from the wolves, pausing long enough to ask, "Have any of you giwls evew had an expewience wike this?"

In an attempt to "help", Bugs persuades Elmer to follow a mad dash towards stage right, as Bugs plays the old gag "run 'this way'!", putting Elmer through a bizarre series of steps which include him running on his feet and on his hair, hopping like a frog, as well as Russian folk dancing.

Bugs and Elmer jump off the edge of the dreamscape. During the descent, Bugs drinks some "Hare Tonic - Stops Falling Hare" and screeches to a halt. The dream-Elmer lands roughly back in his own body and awakens. Elmer swiftly returns his job back at Warner Bros. Bugs happily speaks the catchphrase from the "Beulah" character on the radio show Fibber McGee and Molly, "I love dat man!" 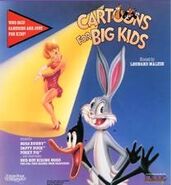 Elmer asks the women in the audience if they have ever had "an expewience wike this."

Milton Gray's comments about its production