The Black Widow is the 41st episode of The Looney Tunes Show.

Gossamer asks Daffy if he would like to play football, then informs Daffy that he is on spring break. Daffy, after pointing out all the time Gossamer has off school, rejects Gossamer's offer for playing football, then hypocritically plays with his own toys. Afterwards, Daffy asks Bugs if he wants to go to Acapulco for spring break, only for Bugs to tell Daffy that spring break is for students only. Bugs then warns Daffy that he will end up in a Mexican jail, but Daffy does not heed this warning. A formally dressed Lola arrives and asks Bugs if he would like to see a movie, but Bugs states that they will be inside and will not have to dress up.

In his room, Daffy tries to convince Tina to go on spring break with him, only for Tina to claim that spring break is just for students, prompting Daffy to hang up. Porky calls Daffy and wants to go on spring break with him, but Daffy refuses and tries to call a post office worker. Downstairs, Lola and Bugs watch The Black Widow, but Lola continuously asks questions during the start of the film. Bugs then limits her to three more questions, and Lola quickly squanders two of them, asking who the black widow is and what she does. Lola states she knows how the movie goes, claiming she saw it a hundred times.

Daffy continues asking people to go on spring break with him, and when Porky calls again, Daffy gives in and agrees. On the flight, Daffy talks about how much fun they will be having, but Porky worries that he left his iron on at home, which could start a fire. The flight attendant tells the passengers to buckle their seat belts, but Daffy disobeys, thinking he does not have to follow rules on spring break. When the plane experiences turbulence, it suddenly lowers, pushing Daffy up to the ceiling.

Back at home, Bugs steps on one of Daffy's toys, then realizes Daffy has left. Just as Bugs rejoices, Lola arrives, panicking about the loss of her mom's diamond bracelet. Bugs tells her that she will just have to accept the consequences after Lola claims she borrowed it without asking. Meanwhile, Daffy and Porky arrive at Mexico, where Porky fears he left his oven on, but Daffy does not panic and tells him to stop worrying. They then board the bus that reads "Tacapulco" rather than "Acapulco."

Bugs wakes up after a good night's sleep, then goes out to get his newspaper, only to encounter Walter, who panics about losing his wife's diamond bracelet. He then holds up a card reading "The Black Widow" and insists Bugs helps, not wanting his wife to know. In Lola's room, Bugs finds Lola literally facing the music; she is facing a speaker which is playing music. Bugs then stops the music and holds up the black widow card, and Lola admits she panicked and used the card to buy some time to look for the bracelet. Afterwards, they retrace their steps, and Lola remembers she stopped for frozen yogurt. She then admits she tried to go to the hospital after getting a brain freeze but never made it, noting she cannot drive with her eyes closed. Then she reveals she went to other various places before returning home.

Daffy and Porky arrive at Tacapulco, where there is not much to see. Just as Daffy realize they are in the wrong place, the bus leaves, stranding them in Tacapulco for the rest of spring break. Meanwhile, Bugs checks the places Lola has been for the missing bracelet, while Lola plays around. After failing to find it, he tells Lola to come clean, then notices a news report about a missing diamond from the museum. Bugs then visits Lola, and she notes that she could not resist stealing a diamond, even though she knows she will be caught. Lola asks Bugs to help her return it, and he reluctantly agrees.

At Tacapulco, Porky worries that he left his curling iron on, but Daffy ignores his situation and tries to make the most of spring break. He then plans on streaking through the village, even though Porky is reluctant at first. Initially, the townsfolk are confused, but when Daffy explains the ruse, they become shocked and lock themselves in their homes. Unfortunately, Daffy and Porky are imprisoned afterwards, much to Daffy's dismay.

Bugs and Lola make plans to return the stolen diamond, which involves making an aerial assault by skydiving, cutting the skylight over the display, returning the diamond, and removing the security tapes. Bugs finds Lola's mom's diamond bracelet around Lola's ankle, and Lola explains she wanted to wear it as an anklet, much to Bugs' dismay.

Back at Tacapulco, Porky worries that he left his curtains open, which could allow sunlight to enter through the window and through his magnifying glass, igniting the papers on his desk. The sheriff, Slowpoke Rodriguez, allows them to have one phone call, so Daffy uses it to call Bugs, who is discovered by a security guard back at the museum. Daffy then calls Speedy, who was fast asleep in the early morning. Speedy rushes over and finds Slowpoke Rodriguez, his cousin. They have a conversation and then host a fiesta for Speedy's return while Daffy tries to prank a mule, only for it to kick him into a window.

Bugs goes to jail but is soon let out thanks to Lola and her father. Lola literally lets the cat out of the bag by opening a bag, revealing Sylvester, who screams and scurries off. Walter admits that Lola confessed, only for Bugs to learn that what Lola "confessed" was a lie. Bugs glares at Lola but then forgives her when she hugs him. Meanwhile on an airplane, Porky admits that he needed to cut loose and thanks Daffy for taking him with him. At Porky's house, sunlight enters through a magnifying glass, then reflects off a turned-on stove and a plugged-in curling iron, then ignites the paper on the desk. Porky returns home to see his house roar up in flames, much to his chagrin. 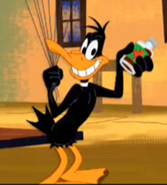 Retrieved from "https://looneytunes.fandom.com/wiki/The_Black_Widow?oldid=188426"
Community content is available under CC-BY-SA unless otherwise noted.