The Bugs Bunny Show is a long-running American television anthology series hosted by Bugs Bunny, that was mainly composed of Looney Tunes and Merrie Melodies cartoons released by Warner Bros.. Because Warner Bros. did not have the copyrights or TV distribution rights to all of their cartoons (some of the copyrights, but not the original negatives, were sold to Associated Artists Productions in 1956; The TV distribution rights to all the black-and-white Looney Tunes and some black-and-white Merrie Melodies were held by other companies until 1969), the show only could air cartoons released between "You Were Never Duckier" and "Injun Trouble".

After three seasons, The Bugs Bunny Show moved to Saturday mornings, where it remained in one format or another for nearly four decades. The show's title and length changed regularly over the years, as did the network: both ABC and CBS broadcast versions of The Bugs Bunny Show, as did Canadian network CBC Television (1969-1975) and local Canadian stations via syndication (1975-early 1980s). In 2000, the series, by then known as The Bugs Bunny & Tweety Show, was canceled after the Looney Tunes and Merrie Melodies libraries became the exclusive property of the Cartoon Network family of cable TV networks.

Unlike The Porky Pig Show or The Road Runner Show, not every episode featured a Bugs Bunny cartoon.

The original Bugs Bunny Show debuted on ABC prime time on October 11, 1960, airing on Tuesdays at 7:30 PM EST, under the sponsorship of General Foods (Post cereals, Tang, etc.). Newly produced linking segments were done for each episode by the Warner Bros. animation staff. Chuck Jones and Friz Freleng produced, directed, and created the storyboards for the earliest of these, with Robert McKimson later taking over the direction while Jones and Freleng continued producing and writing. [1] The wraparounds were produced in color, although the original broadcasts of the show were in black-and-white.

The show's theme song was "This Is It", written by Mack David and Jerry Livingston ("Overture/curtain, lights/this is it/the night of nights..."). The opening title sequence, animated by Freleng unit animator Gerry Chiniquy, [2] features Bugs and Daffy Duck performing the song in unison. For the final chorus, a lineup of Looney Tunes characters joins Bugs and Daffy onstage (Porky Pig, however, is absent from the procession).

The Bugs Bunny/Road Runner Hour became The Bugs Bunny/Road Runner Show in 1978 after CBS added another half-hour to the runtime. In 1981, a companion Sylvester & Tweety, Daffy, and Speedy Show was added to the CBS schedule, which included a number of later cartoons produced by a reestablished Warner Bros. Cartoons studio from 1967 to 1969. The following year, this new companion series was canceled, and its cartoons were incorporated into the The Bugs Bunny/Road Runner Show, which was broadcast as two separate hour-long programs on Saturday mornings. [5] In 1983, CBS returned the show to 90 minutes, the bridging sequences were dropped, and the show's opening titles were re-animated. The following year, the "This Is It" opening was jettisoned altogether; a new title sequence (created from clips of the cartoons) and new theme song (It's Cartoon Gold), composed by Steve Zuckerman with lyrics by John Klawitter, introduced the show.

CBS gave up the rights to broadcast the Warner Bros. cartoons following the 1984–85 season, and as a result, the show moved back to ABC, where it became The Bugs Bunny/Looney Tunes Comedy Hour. Cartoons featuring Tweety or Speedy Gonzales were not broadcast on ABC during the 1985–86 season. The following year, however, Tweety cartoons were added to the program, which was reduced to a half-hour and renamed The Bugs Bunny & Tweety Show. [7] Beginning with its third season, The Bugs Bunny & Tweety Show was expanded to a full hour, and the original "This Is It" theme was reintroduced, accompanied by a newly animated introductory sequence. [7] Another version of the "This Is It" opening sequence was done in 1992.

Though the program did not qualify for the educational/informational designation, it nonetheless remained on Saturday mornings after the new designation debuted in 1996, one of the few non-E/I programs to survive the rules changes. The program was often paired with ABC's in-house Schoolhouse Rock! shorts during this time.

The hour-long Bugs Bunny & Tweety Show remained on the air until 1999, when it was again reduced to a half-hour. In 2000, Warner Bros. made the Looney Tunes and Merrie Melodies film library exclusive to Cartoon Network, as it, along with parent Warner Bros., is owned by WarnerMedia. As a result, The Bugs Bunny Show ended its four-decade-long network run on September 2nd 2000 containing The Grey Hounded Hare, Tugboat Granny, and Guided Muscle, ending one of the longest runs in the history of United States network television. [7]

This show is credited for keeping the Warner Bros. cartoons made during the Golden Age of American animation a part of the American consciousness. Indeed, the show ran for more than four decades, and helped inspire animators, comedians, historians, and others who watched Saturday morning television.[8] The "This Is It" song's fame is such that it has been used elsewhere such as in the Canadian province of Ontario where it was used in a TV commercial promoting the various performing arts tourist attractions where artists of various disciplines sing separate lines of the song.

When Warner Bros. released its video series Golden Jubilee, featuring the classic cartoons, the opening sequence shows the Tasmanian Devil maniacally riding a motorcycle down a city street, chased by a police car. He makes a sharp turn into a theater, where the rest of the Looney Tunes are performing to the Bugs Bunny Show tune.

Title sequences and some linking material from the original Bugs Bunny Show are included as bonus features on each volume of the Looney Tunes Golden Collection DVD collection. As the original color negatives were cut up by CBS and ABC to create later versions of the show, the linking sequences are presented on DVD using a combination of footage from both what's left of the color negatives (some of which were used in later incarnations, thus helping to preserve them) and the black-and-white ABC broadcast prints prepared in the early 1960s.

However, there is one rather unimpeachable voice who says that the shows do exist in complete form. Jerry Beck (who has done extensive research in the Warner Bros. cartoons) states that copies of the show are not lost; in fact, black-and-white negatives of all episodes are in the possession of Warner Bros. (and color negatives may exist in Europe). [9] He has been instrumental in the release of bridging material on the Golden Collection DVD's. For reasons unknown however, Warner Bros. is withholding the episodes for the time being; the decision to restore the series and release to the public entirely rests on them.

Episode 22 has been released on Saturday Morning Cartoons: 1960's Volume 2.

ABC and CBS heavily cut their cartoons in these Bugs Bunny Show incarnations, often for content, moreso than any other television network in the United States.

The majority of edits are done to remove violence that goes beyond normal slapstick, scenes featuring racially and ethnically insensitive caricatures (mostly Native Americans, Asians, Latinos, and African-Americans, though ABC cut the end of the Sylvester and Tweety short "Trip for Tat" because it had Sylvester speaking in a faux Italian accent and eating spaghetti, claiming that Italians are fat because they eat huge servings of spaghetti), and any scene containing dangerous, imitable behavior (often cigarette smoking, alcoholic drinking, fooling around with electricity, ingesting dangerous chemicals, any scenes involving suicidal actions, running into busy streets, and getting locked or trapped in appliances or trunks, to name a few examples).

ABC also cut out scenes from Looney Tunes cartoons that were not only violent or considered racially insensitive, but also may be offensive to those with speech impediments (the "A thousand a-ble-a-ble bucks" stuttering gag in "Dog Collared") or mental illness (cf. the "Fruitcake Sanitarium: It's Full of Nuts" sight gag in "Hare Brush" and Daffy thinking the possessed Melissa Duck is a schizophrenic, calling her "Sybil", and asking her if she can conjure up her "older sister" personality in "The Duxorcist").

In both cases, the edits done to these cartoons often caused plotholes or ruined jokes by cutting either the set-up, the punchline, or both.

These Bugs Bunny Show incarnations are known to edit out the original opening and closing credits of all the cartoons aired, presumably because they did not have have the rights to show them with their original credits intact at all. Consequently cartoons with gags that involve the credits sequence (such as "Stop, Look and Hasten", "Box Office Bunny", "Whoa, Be-Gone!") have these opening/ending gags cut.

The Bugs Bunny Show - A Star Is Bored - Bridging Sequences

The Bugs Bunny Show - Do or Diet - Bridging Sequences 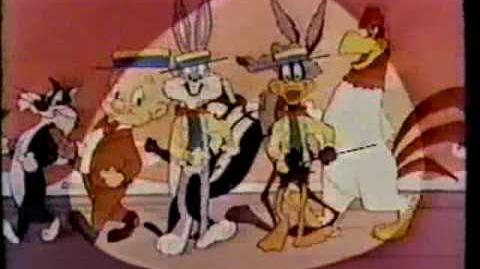 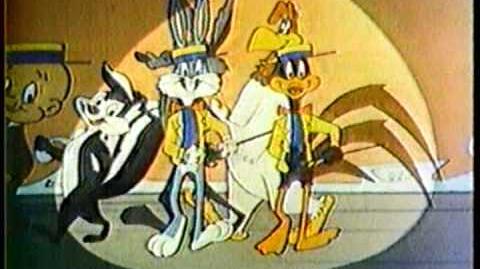 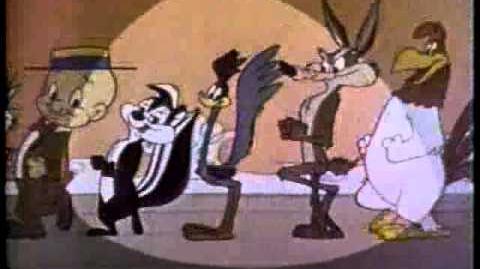 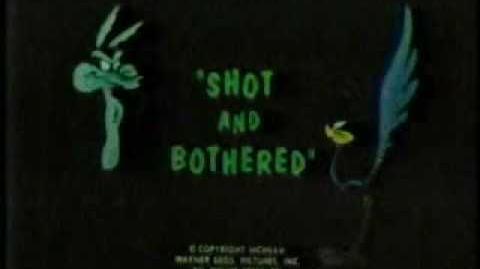 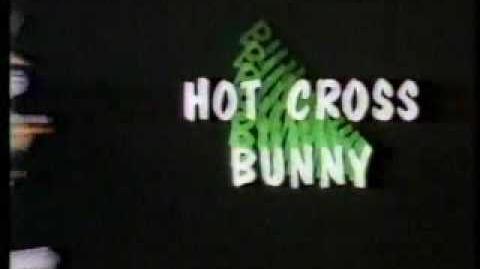 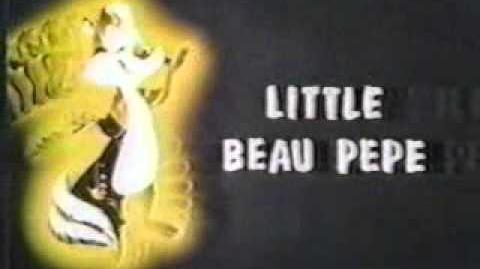 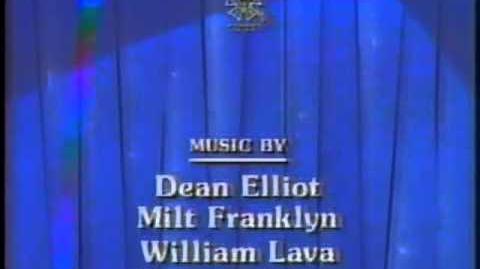 "Chaser on the Rocks" 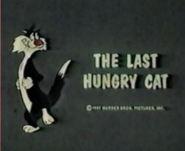 "A Message to Gracias"

"Portrait of the Artist as a Young Bunny"

My Bunny Lies over the Sea

Tweety and the Beanstalk

"The High and the Flighty"

"Dough for the Do-Do"

"Odor of the Day"

"A Bird in a Guilty Cage"

"Tweety and the Beanstalk"

Retrieved from "https://looneytunes.fandom.com/wiki/The_Bugs_Bunny_Show?oldid=241284"
Community content is available under CC-BY-SA unless otherwise noted.