The Cat Came Back is a 1936 Merrie Melodies short directed by Friz Freleng.

A curious kitten leaves her family to play with an equally curious little mouse from across the hall, despite both being told by their mothers how bad the other's family is. Mama Mouse warns her kids to stay away from cats, while Mama Cat tells her kids to attack all mice. The kitten and mouse sneak out of their lessons and listen to some records together as an excuse to get in some hot 1930s tunes and dance around. While dancing, they accidentally fall down a drain into the sewer. The little kitten is saved by the little mouse. The two mothers get together to rejoice, but old feuds are not so easily forgotten, and the cat and mice families start to fight again. 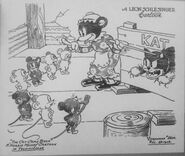 The Blue Ribbon ending card with the 'Turner Entertainment' dubbed version notice from the cartoon's EU Turner print. Notice that the font used for the dubbed disclaimer is different from the other EU dubbed versions, as the font used appears to be smaller and thicker than usual.
Add a photo to this gallery

Retrieved from "https://looneytunes.fandom.com/wiki/The_Cat_Came_Back?oldid=201158"
Community content is available under CC-BY-SA unless otherwise noted.