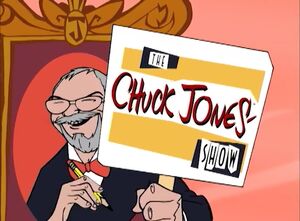 The Chuck Jones Show is an anthology series that aired on Cartoon Network. It premiered Sunday April 8, 2001 at 8:30pm.

1. The Cricket in Times Square
Based on the book, a cricket from the country becomes lost in New York. He gets by with the help of his new friends and his newfound talent.

2. A Very Merry Cricket
Chester Cricket's friends ask him to return to New York to make the holiday merry.

3. Mowgli's Brothers
Based on Kipling's The Jungle Book, Mowgli was raised by wolves and must now help them fight off a tiger.

4. Rikki Tikki Tavi
Also from The Jungle Book, a British family in India takes in a mongoose for a pet, and he protects them from two poisonous cobras.

5. The White Seal
Also from The Jungle Book, a seal learns about survival in the Arctic. Despite being somewhat of an outcast, he saves his herd from human hunters.

Retrieved from "https://looneytunes.fandom.com/wiki/The_Chuck_Jones_Show?oldid=164682"
Community content is available under CC-BY-SA unless otherwise noted.