The Curious Puppy is a 1939 Merrie Melodies short directed by Chuck Jones.

A little while puppy comes by a closed up amusement park. Curiously the puppy crawls underneath the gates to get a better look and he finds a cat object on the top of the Black Cat Cafe and begins to bark at it before going to check it out. He accidentally pulls on the master switch, causing the entire park to light up!

The puppy crawls out from the garbage can he hid in, unaware of another dog, this one a watchdog. He groggily awakens..

The two dogs run outside and into a photography area. The guard dog curiously looks around, not seeing the puppy hide on a woman's model until he goes behind it. But when he tackles it the little puppy lands in the automatic popcorn machine. He sniffs the popcorn, then begins to eat some of it until seeing he is now face to face with the big dog. In which he dives into the popcorn and the bigger dog turns on the machine and gets the little puppy stuck into a popcorn bag. Butter is poured on his head before the bag is deposited out. The guard dog carries the bag, now intent to make the puppy leave but the puppy falls out of the bag through a huge rip.

The puppy then takes off and runs onto a toy puppy display, that all resemble him!

The dog barks then pounces on them but destroys many of them. The little puppy barks, apparently not actually on the display and the guard dog rips the apparently stuffed dog to pieces. He then sees that the puppy is actually on the other side of the gate and bursts into tears. 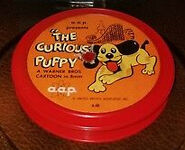 (2020) Streaming
HBO Max (restored)
Add a photo to this gallery

Retrieved from "https://looneytunes.fandom.com/wiki/The_Curious_Puppy?oldid=237784"
Community content is available under CC-BY-SA unless otherwise noted.