The Daffy Doc is a 1938 Looney Tunes short directed by Bob Clampett.

The title is a pun of the name Daffy Duck and the word "doc," a slang term for "doctor." Since the word "daffy" means "crazy", the title means "the crazy doctor."

The Stitch in Time Hospital's motto is "As ye sew so shall ye rip!" In the operating room, Dr. Quack, assisted by Dr. Daffy Duck ("also a quack"), is about to perform surgery. As the operation starts and Dr. Quack asks for his instruments in an increasing rate, Daffy goes berserk and jumps around the room, tossing the instruments in the air and using the air bag as a punching bag. He is then ejected from the room and ends up stuck in an iron lung. He fights his way out of it, but his body begins to inflate and deflate several times. Humiliated, Daffy insists that he will not take this lying down and states that he will soon get his own patient. Daffy opens the window and sees Porky Pig strolling by the hospital. Seeing his big chance, Daffy follows Porky around the corner and knocks him out with his mallet, then carries him inside on a stretcher. Inside a hospital room, Daffy is examining Porky by checking his heartbeat with a ratty stethoscope and his temperature with a thermometer, which turns out to be a lollipop. Porky insists that he isn't sick, but Daffy decides to go forth with his plans. After having a consultation with two other images of himself (brought on by a hit on the head with the mallet), he decides to perform surgery on Porky. Grabbing a large saw from his medicine bag, he walks over to Porky and lifts his gown to operate! Porky realizes what Daffy's plan is and squirms around to escape from him. Porky runs out of the room and slams a door behind him in an effort to get away, only to find Daffy standing right behind the door with a cheery "Hello Chum!" Porky crashes through the door and the chase goes on. Just as Daffy catches up with Porky they both crash into the iron lung where it spits them back out and they both inflate and deflate like balloons once again. 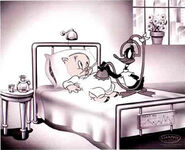 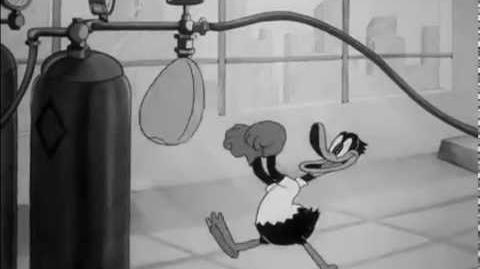 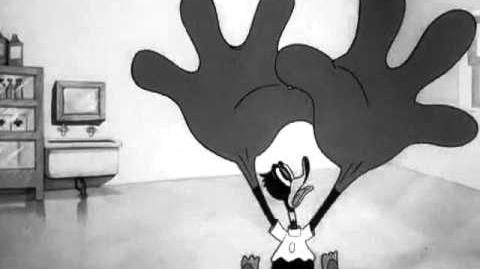