The Devil (AKA Satan) is the ruler of Hell in Christian mythology and literature. Satan makes appearances in several Looney Tunes and Merrie Melodies cartoons, usually in a cameo or as a minor antagonist. However, he plays a central role in Looney Looney Looney Bugs Bunny Movie as the secondary antagonist, where he seeks to collect Bugs Bunny's soul and has the recently deceased Yosemite Sam catch the rabbit as payment for his freedom from Hell.

The character's physical appearance varies in each cartoon. Some notable examples are in "Satan's Waitin'", where the devil's character design resembles that of Hector the Bulldog and in "Draftee Daffy", The Little Man from the Draft Board is revealed to be the devil.

"Goin' to Heaven on a Mule" 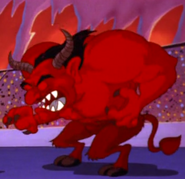 Pinky and the Brain
Add a photo to this gallery

Retrieved from "https://looneytunes.fandom.com/wiki/The_Devil?oldid=191510"
Community content is available under CC-BY-SA unless otherwise noted.