"The Dover Boys at Pimento University" or "The Rivals of Roquefort Hall" (better known as simply The Dover Boys) is a 1942 Merrie Melodies short directed by Chuck Jones.

The three Dover Boys, Tom, Dick and Larry (a play on both the Rover Boys' names "Tom, Sam and Dick" and the generic reference "Tom, Dick and Harry") are having a day out with "their" fiancee, "Dainty" Dora Standpipe (a pun on the name of the eldest Rover's fiancee "Dora Stanhope").

The Boys are called upon to rescue Dora when she is kidnapped by stock villain "The Nefarious" Dan Backslide, a pun on the name of the Rover Boys series villain "Dan Baxter". The "former sneak of Roquefort Hall," his feelings for Dora are summed up in his comment, "How I love her! ... father's money!" Backslide steals a conveniently placed, abandoned runabout, kidnaps an oblivious Dora while she and the Dover Boys are playing hide-and-seek, takes Dora to a remote mountain cabin, but discovers that despite appearances, Dora is anything but "dainty"; she proceeds to give him quite a beating while still acting the damsel in distress — crying for help and pounding on the door and on Backslide, until Backslide is also crying out for help from Tom, Dick and Larry.

When the Dover Boys finally arrive, they lay a few punches on the barely conscious Backslide before managing to knock each other out as Backslide collapses to the floor beneath their swinging fists. Dora is then escorted away by an odd old drunken baggy-eyed sailor man in an old-fashioned bathing suit who was a running gag throughout the cartoon, appearing periodically to interrupt the story by walking up, jumping in place, and moving on to the tune of Ed Haley's "While Strolling Through the Park One Day". He and Dora repeat these movements as they walk and hop off into the sunset.

The Boys are from Pimento University ("good ol' P.U.") and from time to time lapse into their "alma mater", sung to the tune of George Cooper and Henry Tucker's "Sweet Genevieve" ("Pimento U., old sweet P.U.", etc.) 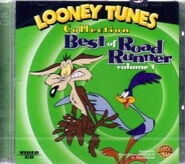 The Dover Boys is notable for being one of the earliest examples of stylized animation, a technique which used shape-heavy designs with minimal movement, as opposed to the type of animation done at that time by the Walt Disney studio. Stylized animation would later be made famous by the artists at startup animation studio UPA, for which Jones moonlighted to direct the political film Hell-Bent for Election in 1944.

According to Jones, Schlesinger and the Warner Bros. studio executives were less than pleased when they screened The Dover Boys, and went through the process of attempting to fire him, despite the fact that the studio wanted him to abandon his Disney-like animation (this cartoon might have been seen as going too far to do so). A replacement for Jones could not be easily found, so he was kept aboard.[citation needed]

Although voice credits from Warner Bros. Cartoons are not easy to find beyond Mel Blanc, it is assumed that John McLeish voiced the part of the narrator (he performed a similar role as the stately, unctuous narrator on several Goofy shorts for the Disney studio). The voice of Tom Dover was performed by long-time Termite Terrace writer Tedd Pierce, who also provided the story. Vocal harmonies were provided by The Sportsmen Quartet. Dan Backslide was a caricature of Jones' animator Ken Harris.

This was the first cartoon to use the 1942-44 red-orange Color Rings and black background, which would continue to be used up to What's Cookin' Doc? in 1944.

The characters Tom, Dick and Larry would later make cameo appearances in the 1990s Fox and WB network series Animaniacs, alongside Slappy Squirrel in "Frontier Slappy", the Warners in "Magic Time" and in Wakko's Wish. A short clip of this cartoon is featured in the opening credits of "Less Than Hero", an episode of another Fox TV show, Futurama. They also appeared cheering in the stands late in the mixed animation/live action movie Space Jam. 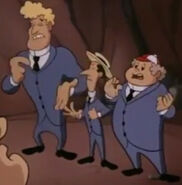 Tom, Dick and Larry in Animaniacs.