The Ducksters is a 1950 Looney Tunes short directed by Chuck Jones.

Porky Pig is on a radio quiz show called Truth or AAAHHH!!, a parody of the popular quiz show Truth or Consequences, hosted by Daffy Duck and sponsored by "Eagle Hand Laundry" in which the object is answer near-impossible questions (such as "Who, mind you WHO, was the referee for the New Zealand heavyweight title fight in 1726?" or "At what latitude and longitude did the wreck of the Hesperus occur?") or "pay the penalty". These penalties include Porky being crushed by the Rock of Gibraltar, rained upon by Niagara Falls, tied up and blown up with dynamite, severe pounding with a mallet, thrashing by a gorilla, threatened by a buzz saw, crushing by safes, and other forms of abuse. However, Porky wins $26 million and three cents which he uses to buy the Ajax Radio Network (costing exactly $26,000,000.03!) and then submits Daffy to the same "penalties" that he had received earlier. Daffy is then tied to a long plank being cut by the same buzz saw Porky was on previously. Daffy screams at his studio audience, "Have you got a doctor in the balcony, lady?!" (This line was a takeoff of another radio quiz show, Doctor IQ, where the announcer would note "I have a lady in the balcony, doctor" to introduce a new contestant.)

Was that a threat mister? 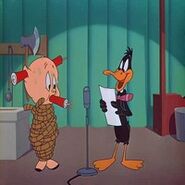 ...you have to pay the penalty!

Hi Boss...
Add a photo to this gallery

Retrieved from "https://looneytunes.fandom.com/wiki/The_Ducksters?oldid=202228"
Community content is available under CC-BY-SA unless otherwise noted.