The EGGcited Rooster is a 1952 Merrie Melodies short directed by Robert McKimson.

Foghorn is watching the eggs while his wife is out playing cards. Henery Hawk, disguised as an Indian, drops by, and Foghorn asks if someone can relieve him. Foggy is able to get Henery to eggsit for a while, but the little hawk soon becomes impatient. Foghorn gives him a "hen grenade" which causes the dog in the barn to explode. The dog helps hawk to steal the eggs, and calls Foghorn wife. The egg then changes hands several times; Foghorn's wife comes along and beans him with her rolling pin. As the final injury, Henery scalps Foghorn with his little tomahawk. 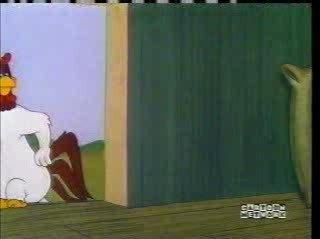