The Early Worm Gets the Bird

The Early Worm Gets the Bird

The Early Worm Gets the Bird is a 1940 Merrie Melodies short directed by Tex Avery.

Mammy Blackbird is tucking her three children into bed. One little bird named Willie pulls out a copy of a book titled The Early Bird Gets the Worm and starts reading. Mammy scolds him and warns that if he tries to catch that worm, that the ol' fox will catch him. Willie isn't frightened by his mother's warning and sets his alarm clock so he can have a worm for breakfast. The next morning, he sneaks out of house and tracks down the worm. The little worm turns out to be quite the smart aleck and leads Willie on a chase. This attracts the attention of the fox who catches Willie and starts to make himself a blackbird sandwich. The worm saves the little bird by siccing an angry bumblebee on the fox. The fox's bottle of ketchup shatters on his head, and the fox runs off thinking he is bleeding to death. The worm and bird make amends, and Willie hops back into bed just as Mammy comes in to wake him. While his brothers both ask for worms for breakfast, Willie replies that he doesn't want any worms. "Neither does I, Mammy!" exclaims the worm. 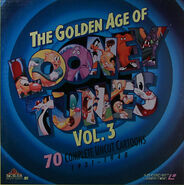