The Foghorn Leghorn is a 1948 Merrie Melodies cartoon directed by Robert McKimson.

Henery's grandfather raids a chicken coop and walks out with a couple of chickens, but is stopped by Foghorn, who doesn't let Henery's grandfather make off with the traumatized chickens or get a word in edgewise before deliberately literally bumping him in the stomach and kicking him out. (Foghorn uses this technique against a cat several times, two years later in A Fractured Leghorn, because the cat wants the same worm as Foghorn.) When Henery asks his grandfather if that was a chicken, the grandfather claims Foghorn isn't a chicken but a "loud-mouthed shnook" (After this, he is not seen for the rest of the short and walks away with a yellow stripe down his back, signifying that he is a coward due to Foghorn's guarding of the chickens). Henery goes over to Barnyard Dawg's house, and knocks the dog out with a hammer. Foghorn stops them and asks Henery what he thinks Foghorn is — to which Henery replies that Foghorn is a "loud-mouthed shnook." Foghorn isn't helped when the dog wakes up and kicks him, calling him a "shnook."

Foghorn continues to try and convince Henery that "I'm a chicken. Rooster, that is." He tries to crow at "sun-up" (pulling up a cardboard cutout of the sun and crowing), but that does not work. Henery brushes off Foghorn and exits before Foghorn can even finish his demonstration, leaving only two signs in his absence. The first read "Shnook!" and the second said "Loud Mouth'd That Is!". When Henery pushes along a trunk, Foghorn again tries to straighten Henery out, but his emphasizing by hitting the trunk winds up hitting the Barnyard Dawg, who chases Foghorn up a ladder and into a watermelon, after which Foghorn mutters "Some days it don't pay to get outta bed!".

When Henery throws a stick of dynamite into the Barnyard Dawg's house, Foghorn tries to stop the explosion, but the dog slams Foghorn (thinking he was responsible) to the ground several times and finally calls him a "good-for-nothing chicken," which is enough for Henery — he suddenly slams a shovel over Foghorn's head and starts dragging him away. Although Foghorn now calls himself a "loudmouthed shnook," Henery says, "Chicken or shnook, in our oven he'll look good!"

For a complete transcript, go here. 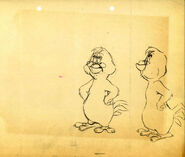 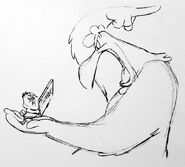 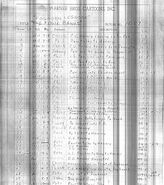 Retrieved from "https://looneytunes.fandom.com/wiki/The_Foghorn_Leghorn?oldid=191546"
Community content is available under CC-BY-SA unless otherwise noted.