The Foxy Duckling is a 1947 Merrie Melodies short directed by Arthur Davis.

An insomniac fox residing in a forest needs duck down for his pillow in order to be comfortable enough in his bed to fall asleep, and to this purpose he pursues a wily yellow duck. The fox uses a decoy and duck call, and is blasted by hunters' rifles. He builds a series of wooden extensions from a tree branch in an effort to reach the airborne duck, but the duck drops a feather onto the fox's head, and the extensions beneath the fox collapse, with the fox plunging mortally to ground. He returns as an angel and, now able to fly, chases the duck into the distance. 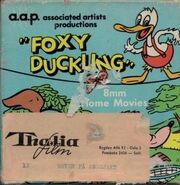