This article is about the Merrie Melodie. For the Mr. Hook cartoon, see The Good Egg (Mr. Hook).

The Good Egg is a 1939 Merrie Melodies short directed by Chuck Jones.

A hen with no chicks adopts a leftover turtle egg, which obviously hatches into a turtle. Naturally, the turtle does not fit in nicely with the baby chicks. The turtle becomes the butt of jokes for the chicks, until real danger happens. 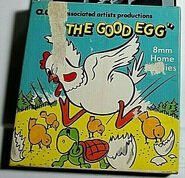