The Honey-Mousers is a 1956 Looney Tunes short directed by Robert McKimson.

The title and the short itself are a play on The Honeymooners.

There's been no food in the house since the people moved out, forcing Ralph Crumden to rely solely on just stale cheese on mousetraps to survive, at the cost of getting painfully trapped in it. He and his friend Ned Morton are happy when a new family moves in and brings groceries. They try to steal food from the kitchen, but are surprised to find it guarded by Sam Cat.

They build a "Trojan dog" from a barrel and operate it from inside. They walk it over to the refrigerator, but while they are busy loading it up with food, Sam climbs inside of it and waits. When they get back inside, Sam attacks, the "dog" is splintered, and Ralph and Ed barely make it back to their mousehole alive. Ralph's wife Alice asks why they don't just get rid of Sam. Ralph says if she thinks it's so simple, then she should just do it herself, so she does, and successfully stands up against the mean Sam by slapping it in the face, causing the frightened Sam to flee. The grouchy Ralph, who had a change in heart, thanks his wife Alice for getting rid of Sam and kisses her affectionately. 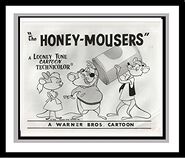 Retrieved from "https://looneytunes.fandom.com/wiki/The_Honey-Mousers?oldid=231894"
Community content is available under CC-BY-SA unless otherwise noted.